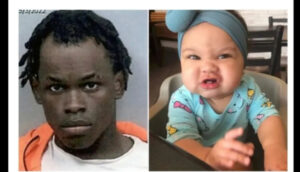 A Georgia man was arrested at Snellville Police Department on an outstanding warrant but failed to mention to police his 8-month-old daughter was left out in his car, resulting in her death.

He has now been charged with second-degree murder.

According to authorities, 20-year-old Davied Japez McCorry Whatley arrived at the police station around 2 p.m. on Tuesday, in an effort to retrieve guns confiscated from a different investigation.

As part of department policy, a warrant check was conducted on Whatley which resulted in the man being arrested and taken into custody in the lobby of the police station, People reported.

Whatley reportedly had an active misdemeanor probation violation warrant for a hit-and-run with no insurance.

The infant, Nova Grace Whatley-Trejo, was left in a hot car at the nearby city hall parking lot for about seven hours after Whatley was arrested, officials say. Her grandmother discovered the unresponsive baby inside the vehicle that evening. According to that day’s weather data, temperatures reached a high of 86 degrees.

While Whatley was at the station, he didn’t alert anyone to his unattended daughter, according to the Georgia Bureau of Investigation.

“After 2 p.m., he was transported to the Gwinnett County Detention Center,” detective Jeff Manley said during a news conference on Wednesday.

Authorities believe Whatley called the child’s grandmother Leticia Padilla later that day, which caused her to go check on the child. She then took the baby to Piedmont Eastside Medical Center at 9:25 p.m., where she was pronounced dead.

Whatley posted bond that same day, but was arrested again on Wednesday at 11 a.m. and charged with second-degree murder in connection with the baby’s death, reported USA Today.

He is being detained without bond and has not entered a plea to the charge. The case has been transferred to the Gwinnett County District Attorney’s Office.

Whatley’s family claims he pleaded with police to check on the baby.

“He told them. He loved his daughter,” Padilla told WSB-TV. “All they had to do was listen. They thought he was lying.”

She said police relayed to Whatley someone would tend to Nova. It wasn’t until the phone call that evening that the baby’s grandmother was notified. She does not believe the police.

“They can say whatever they want to. They have to cover their tracks,” Padilla said.

The investigation is ongoing.