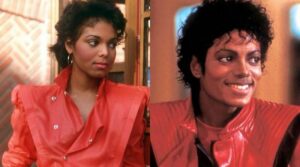 Janet Jackson is opening up in her new documentary about her past struggles with her weight. She even recalls her late older brother teasing her over it.

In the Janet documentary airing on A&E and Lifetime on Friday, the “Control” singer got candid about the late Michael Jackson taunting her weight struggles, NY Post reports.

“There were times when Mike used to tease me and call me names. ‘Pig, horse, slaughter hog, cow,” Jackson shares.

“He would laugh about it, and I’d laugh too, but then there was some­where down inside that it would hurt,” she said, “When you have somebody say you’re too heavy, it affects you.”

After being cast in the role of Penny in the 1970s sitcom Good Times, Jackson’s weight struggles began. Playing a young girl from an abusive home who is adopted, Jackson says it was the first time in her life when she started caring about her physical appearance.

“I did Good Times, and that’s the beginning of having weight issues and the way I looked at myself.”

“I’m an emotional eater, so when I get stressed or something is really bothering me, it comforts me,” Jackson admitted.

Growing up in the public eye, Jackson tried to maintain a more youthful appearance. But it was hard to hide her developing body.

“I was developing at a very young age, and I started getting a chest, and they would bind it so I would look more flat-chested,” she said,

At 55 years old and having grown up in a famous family, Jackson blamed fame for most of the trouble she’s faced in her life.

“I probably would have wound up not having a problem.”

While there were many added benefits to growing up a Jackson, the Grammy Award-winning singer admits it came with “a great deal of scrutiny.”

“I am thankful [for the Jackson name] because it has opened a great deal of doors for me, having that name,” she said.

“I wanted my own identity, I didn’t want people to pick up this body of music because of my last name.”