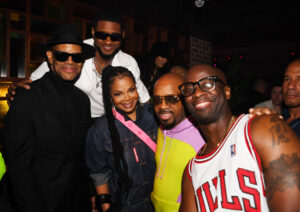 During the 2022 Billboard Music Awards, Janet Jackson took the stage to present R&B legend Mary J. Blige, with the Icon Award. “Mary J. Blige represents truth,” Jackson said. “Her work has always given us comfort because she sings me, she sings you.”

Later that weekend, Jackson was celebrated at her 56th birthday party at On the Record at Park MGM.

According to Yahoo News, the party was a surprise. It was attended by producer Jermaine Dupri—her ex-boyfriend, her producer/collaborator Jimmy Jam, Usher, Nelly, and producer/songwriter Bryan-Michael Cox. Sounds for the party were provided by Anderson. Paak as the DJ.

Jackson also attended a performance by Silk Sonic, the 70s-inspired fusion group featuring Paak and Bruno Mars. On Instagram, she called the show a “must-see.”

RuPaul’s Drag Race alum Peppermint also honored Jackson with a recreation of one of the star’s hit music videos.

“I have always modeled my live performances after Janet’s,” Peppermint said in a statement, “but up until this moment, most of those are just memories with nothing to show and no way to look back on. Now that I have the ability, I wanted to do those performances justice. I gathered a bunch of friends who are also big fans of Janet to put together a dance tribute video of ‘If’ from her 1993 album Janet. Happy birthday, Miss Jackson!!”

Earlier this year, Jackson shared some insight into her early life and career with a two-part Lifetime documentary called Janet. The documentary event marked the 40th anniversary of Jackson’s first album, the self-titled Janet Jackson, released in 1982.

The four-hour documentary was over five years in the making and featured appearances by Missy Elliott, Mariah Carey, Paula Abdul, her brother Tito Jackson, and her longtime dancer Whyley Yoshimura.