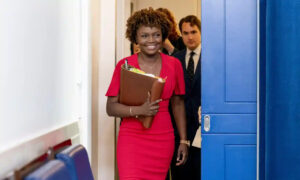 On Monday, Karine Jean-Pierre shared some words as she officially began her White House Press Secretary duties during her historic briefing room debut.

The Hill reported that the former principal deputy press secretary took to the podium on Monday, marking her first press briefing in her new role. Her speech acknowledged the contributions of generations before her and pledged to maintain honest messaging as she takes over for Jen Psaki.

“I am obviously acutely aware that my presence at this podium represents a few firsts,” Jean-Pierre said at the top of Monday’s press briefing. “I am a Black, gay, immigrant woman, the first of all three of those to hold this position. I would not be here today if it were not for generations of barrier-breaking people before me. I stand on their shoulders.”

Jean-Pierre has quite the résumé working in White House communications. Jean-Pierre became the second Black woman to hold the White House daily press briefing last May, BLACK ENTERPRISE previously reported. This achievement followed her experience as an adviser for Joe Biden during his presidential campaign and was chief of staff for Vice President Kamala Harris.

The new appointment began on May 13, following Psaki’s departure. According to The Guardian, the 64-minute debut ranged from the recent mass shooting in Buffalo to baby formula shortages. As she transitions into her role, Jean-Pierre promises to “work every day to continue to ensure we are meeting the president’s high expectation of truth, honesty, and transparency.”

“I also have tremendous respect for the work that you all do, which I know it’s not easy,” she continued. “The press plays a vital role in our democracy. And we need a strong and independent press now more than ever.”

In the official announcement, President Joe Biden noted just how much Jean-Pierre’s experience would transcend beyond the responsibilities of leading communications.

“Karine not only brings the experience, talent, and integrity needed for this difficult job, but she will continue to lead the way in communicating about the work of the Biden-Harris Administration on behalf of the American people,” PresidentBiden said in a statement.