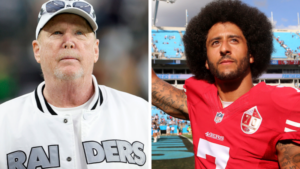 In an interview on the latest episode of Race in America: A Candid Conversation that aired earlier this week, Mark Davis, who owns the Las Vegas Raiders, said that Kaepernick is deserving of every chance to become a quarterback in the league once again, NBC Sports reports.

“I believe in Colin Kaepernick,” he said during the discussion. “He deserves every chance in the world to become a quarterback in the National Football League. I still stand by it. If our coaches and general manager want to bring him in or want him to be the quarterback on this team, I would welcome him with open arms.”

Davis also compared the ex-quarterback to Tommie Smith. He was a gold medal-winning sprinter who set a record in the 200-meter race at the 1968 Olympics in Mexico City. Smith and bronze medalist John Carlos were expelled from The Games after raising their fisted gloves during the medal ceremony to protest oppression.

The American power structure vilified the two athletes. They both paid a steep price for standing up and exposing the inequality they and others like them faced back in America.

“In the same vein, Colin Kaepernick has sacrificed a lot of the things that he could have been doing in his life to get a message across about police violence and equity and inclusion in America,” Davis said. “I stand by that.”

Davis, the son of his legendary NFL football coach and owner Al Davis, also feels that Kaepernick is misunderstood.

“I think Colin is a very misunderstood human being,” Davis remarked. “I’ve gotten a chance to talk to him. I never really knew Colin, and I didn’t understand him. I didn’t understand the kneeling, what that meant initially. Over time, I have learned a little bit more about it.”