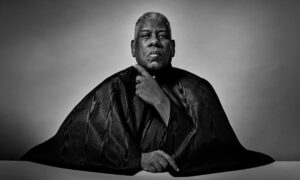 The late fashion icon and former Vogue creative director André Leon Talley was able to enjoy the “extraordinary” findings uncovered in an episode of Finding Your Roots that was filmed prior to his death.

Talley was known for his vibrant, outspoken personality, but the former journalist was left “speechless” while learning more about his family legacy on the PBS series, NBC News reported.

“I’m speechless,” Talley told host Henry Louis Gates Jr. “I have no words to articulate what I feel now. But it’s extraordinary to realize this history, that it is part of my history.”

Talley, who died in January at age 73, was reacting to learning about his great-great-grandfather who was bequeathed from one white owner to another. His experience on Finding My Roots shows the heartwarming experience he enjoyed prior to his death.

“I’ve often thought about them,” Talley said of his ancestors. “I’ve thought about, maybe imagine, in slavery or maybe not—but I just know that they were aware of being Black and indentured.”

The episode was filmed in February 2021, nearly one year prior to Talley’s death from complications of a heart attack and COVID-19. Talley, a native of Durham, North Carolina, died in White Plains, New York, after decades of work in the fashion industry, as noted by The Chronicle, Duke University’s student newspaper.

Talley made history as the first Black creative director at Vogue. His presence in the fashion industry helped open doors for countless others while providing inspiration for future generations.

Among his firsts include being one of the first and only Black people to sit front row at Fashion Week events in the ’80s and ’90s. He also secured press coverage for designers of color, like LaQuan Smith.