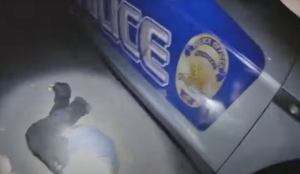 Last September, Radcliff, Kentucky police were notified that a man was trespassing on the Gold Vault Inn property and refused to leave. When the man tried to flee, the officers purposely ran him over with their vehicle causing serious injuries, according to the Courier Journal.

Anthony Gray‘s attorney, Aaron Bentley, said his client left the hotel after the staff was rude to him when the police later confronted him, according to WDRB.

When officers tried to place Gray under arrest, he ran away, evading authorities when a Radcliffe police officer used “his vehicle to run over Anthony Gray, an unarmed Black man, who was suspected only of a violation punishable by a simple fine,” read the federal lawsuit filed in the U.S. District Court, WDRB reports.

Gray, 32, suffered a shattered left tibia and other injuries, and his lawyer accused the officers of using excessive force against his client.

“No reason, no justification, no warning, Officer [Robert] Stephens went to grab Anthony by the arm. Anthony was scared, and ran away,” explained Bentley in an interview with the news station.

The lawsuit states that Officer Justin Skaggs not only used undue force but also violated Gray’s civil rights; according to the Courier Journal,

“Gray had committed, at most, a minor, non-violent offense … and there was no reason to believe that Gray posed a risk of danger to anyone,” said official court documents filed by Louisville attorneys Aaron Bentley and Gregory Belzley, the Courier Journal reports.

“I was shocked to see a police officer run over a man who was unarmed and suspected only of trespassing,” wrote Bentley in an email, according to the Courier Journal.

The suit implicates Radcliff Police Chief Jeffrey Cross and two supervisors of providing insufficient training and supervision of Skaggs and the other officers. The department never reprimanded Skaggs. The federal case lists the city of Radcliff and Officer Robert Stephens as defendants.

Skaggs performed a PIT maneuver, a precision intervention technique used to stop a bolting vehicle; it is not customarily used against human beings, the Courier Journal reports.

Gray still faces third-degree trespassing, alcohol intoxication, and eluding police charges. He entered a not guilty plea and was let go from jail on a $250 unsecured bond.

Gray’s attorney is seeking compensatory and punitive damages for his client, according to the Courier Journal.