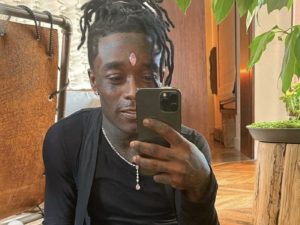 The “XO TOUR Llif3” hitmaker seemingly removed the pink diamond he had imprinted into his forehead earlier this year, the New York Post‘s Page Six reports. Fans noticed the forehead jewel was missing in recent photos he posted alongside his girlfriend, City Girls member JT.

While the exact date of when he removed the diamond remains unknown, his followers have paid attention to its absence in the Instagram Story photos he posted this week and in a Calvin Klein ad unveiled in April.

Back in January, Uzi tweeted about buying “a natural pink diamond” that he began to show off in a series of videos posted online, HuffPost reported. Claiming the ritzy jewel cost him more than “all of [his] cars together,” the “Money Longer” rapper went on to get the diamond embedded into his forehead in February, Rolling Stone reports.

When fans asked why he didn’t just get the diamond put into a ring, Uzi explained why he opted to have it etched into his face instead.

“If I lose the ring yeah U will make fun of me more than putting it in my forehead ha ha jokes on you,” he told one of his followers.

He followed that up by telling rapper Fat Joe that he embedded the diamond into his face to avoid losing it.

“I’m Lil Uzi. I’m turnt up. So $24 million on a ring is the stupidest idea because I’m gonna look down and that ring ain’t gon’ be ther …I know me. I wake up in odd places and different sceneries,” he said.

Well, at least he got it safely removed. Here’s hoping he’s keeping it somewhere safe to avoid his big fear of losing the multi-million dollar jewel.