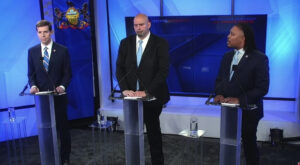 The three men argued back and forth over a litany of issues including the economy, crime and guns, Ukraine, fracking and the COVID-19 pandemic.

But it was Kenyatta who started trending Thursday night when he fervently responded to Fetterman’s claim that as a former mayor he is the only candidate that directly combated gun violence.

“You’re the only Democrat who used a shotgun to chase down an unarmed Black man.” Kenyatta quickly said back.

Kenyatta brought up a 2013 incident where Fetterman confronted an unarmed Black jogger named Chris Miyares while carrying a shotgun. Fetterman, who was the mayor of Braddock at the time, saw the jogger on foot with a facemask and goggles, called 911 and pursued the jogger in his truck.

The Black candidate pressed the Lt. Gov. about the incident quickly, calling him out for the persona he gives off in his advertisements and pressing him to apologize for an incident eerily similar to what Ahmaud Arbery experienced when he was killed in February 2020, setting off the Black Lives Matter movement.

“For somebody who has cut an image as such a tough guy, you’re so afraid of two little words: ‘I’m sorry,’” Kenyatta said.

Fetterman acknowledged the incident saying rumors that he pointed the gun at Miyares “never happened” and when asked by a moderator if he’d do anything differently, Fetterman replied

WTAE reported that Miyares was eventually checked for weapons by police and let go when they did not find any. Kenyatta continued to press Fetterman for an apology saying “It’s certainly not a situation anyone would want to be in.”

Although many Pennsylvanians have heard about the incident, it was the first time that Fetterman addressed the while facing political rivals. The Lt. Gov. said he did nothing wrong and refused to apologize for the incident.

It’s unclear whether the back and forth and the story have put a dent in Fetterman’s lead, but the situation did put him in no man’s land on Thursday and he did not come out of it looking better than he did before. Additionally, Fetterman’s refusal to apologize could lead to even harsher attacks by Republicans in the general debates who will try to make him uncomfortable.

The three men also debated federal cannabis legalization, which Lamb opposed. The Covid-19 pandemic and the possible return of mask mandates, the economy and the performance of President Joe Biden, who Fetterman and Lamb gave a B+ and Kenyatta gave an A-.

Kenyatta and Fetterman did agree on one thing during the night, they both would’ve given Biden a better grade if Sen. Joe Manchin (D-W.V.) didn’t singlehandedly set fire to Biden’s Build Back Better Agenda.