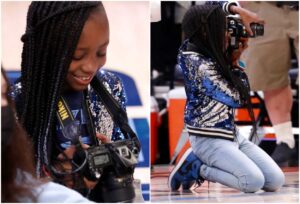 Storee Elle Walton, an 8-year-old photography sensation, turned a hobby into a full-fledged professional venture. From NBA games to weddings, the young girl with the camera is a star.

Walton’s appearance at the March 26 game against the Milwaukee Bucks was her first Grizzly game. According to the Memphis Commercial Appeal, she stood on the baseline at FedExForum with a Nikon camera around her neck while players took an interest in getting captured by the budding photographer.

“When I was at the game, the players made me feel like I was famous,” Walton told the outlet. “It makes me proud to be a little girl with a camera. It’s unbelievable that I can do all this and see these new people.”

Grizzlies shooting guard De’Anthony Melton was one of the lucky players to be photographed by Walton.

“Can I see them?” Melton asked after posing for more shots.

Since the age of 1, Walton inherited her passion from her grandfather, professional photographer Thurman Hobson Jr., whom she affectionately calls “grandman.” Hobson served as her chaperone at the game.

“Some of the stuff she shoots, I look at it, and it totally amazes me she’s able to capture the images that she is at such an early age using professional equipment,” Hobson said, who has been the main photographer of the family for more than 50 years.

Walton aspires to be a “noted, famous photographer.” By 4 years old, the third-grader was earning paid gigs for her talents. According to The Commercial Appeal, when she was six years old, Walton has even photographed multiple Southern Heritage Classic football games and celebrities. Her portfolio added at least 10 weddings last year.

Her mother, Tanyel Hobson-Walton, is proud of her daughter.

“She’s taken on what my dad loves so much,” Hobson-Walton said. “It started out as a hobby for her, but now she’s getting a lot of jobs because of her professionalism. She’s a kid first, but when she comes, she comes as a professional.”

She added: “If she commits to a job, she carries it out, and that for me, I can say that I’m most proud about.”