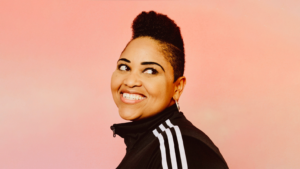 Design has kept Cheresse Thornhill-Goldson’s interest since high school. It’s also what led her to study industrial design at the College for Creative Studies in Michigan.

While at CCS, Thornhill-Goldson landed an internship at Nike, which gave her a full-time job after graduating in 2007. At Nike, she met two of her mentors, Duane Lawrence and D’Wayne Edwards. Thornhill-Goldson credits the two men with taking her under their wing and preparing her for success in the industry.

“I’m such an advocate for mentorship because I knew that it made all the difference for me being a Black woman in the space,” Thornhill-Goldson told AfroTech. “There’s no other way I would’ve gotten through had I not had mentors already in the industry. I wouldn’t have been in the spaces, nor would my portfolio have been what it needed to be for me to get into the internship and then subsequently a full-time role.”

Thornhill-Goldson spent nine years at Nike as a footwear designer for Nike’s women’s training, Jordan Brand, and emerging markets divisions. However, after a decade at the apparel giant, she wanted to expand on her purpose and help others the way she was helped.

That led her back to school at Full Sail University where she received her master’s degree and began teaching design at the high school and college levels. Now she’s teaching at another athletic apparel giant, Adidas.

Thornhill-Goldson is now the design director at the Adidas School for Experiential Education in Design  (S.E.E.D.) Program. The program, developed in partnership with the Pensole Design Academy, is a strategic pipeline to welcome new talent into the brand and the industry.

The SEED program’s inaugural class in 2020 was an all-female class of creators, and today, Thornhill-Goldson works with Jessica Smith and Liz Connelly. Today, the three women are committed to providing access, awareness, and a pathway for more women to get in and build a footing in the shoewear industry.

Students in the program are paid throughout its duration and receive a housing stipend each month so they can focus on their work.

“It’s really about creating equity,” she said. “We try to remove as many barriers as possible. So, our students just have to be at least 18 years of age and able to work in the U.S. Those are the only requirements. And to be a woman of color because that’s who we’re focusing on.”

Thornhill-Goldson added that those who apply do not need the information art programs typically ask for, including a résumé and a portfolio. Instead, the program creates opportunities for the students and then evaluates them on their ability to collaborate, take feedback, and implement it.

The SEED program is currently taking applications for its third class and the two-year program and has extended beyond footwear to apparel, accessories, and backpacks.