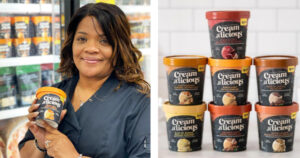 Chef Liz Rogers is the Founder, President, and Executive Chef of Creamalicious, one of the only Black-owned national ice cream brands in mass production.

She prides herself on being truly innovative with her whimsical 2-in-1 desserts that pair freshly baked pastries with homemade ice creams made with only the freshest ingredients.

Chef Liz crafts her blissfully Southern artisan desserts by celebrating her roots and community. Creamalicious has a special way of engaging people with memories of their favorite childhood desserts while honoring the rich history of the South. Chef Liz reveals delectable new dessert perspectives and provides a culinary experience of Southern decadence that is unique, fun, and utterly delicious.

Originally from Cleveland, Ohio, Chef Liz grew up under the watchful eye of her mother and grandmother which helped to hone her passion for cooking. Her never-ending love and enthusiasm led to opening hot-spot restaurants, and she has been highlighted in the media for her highly sought-after food and inspiring work with the community.

Currently, her products are being sold at thousands of locations of Walmart, Target, Meijer, Schnucks and other grocery retailers.

Learn more at the company’s official web site at SoCreamalicious.com

This story first appeared on Blacknews.com.