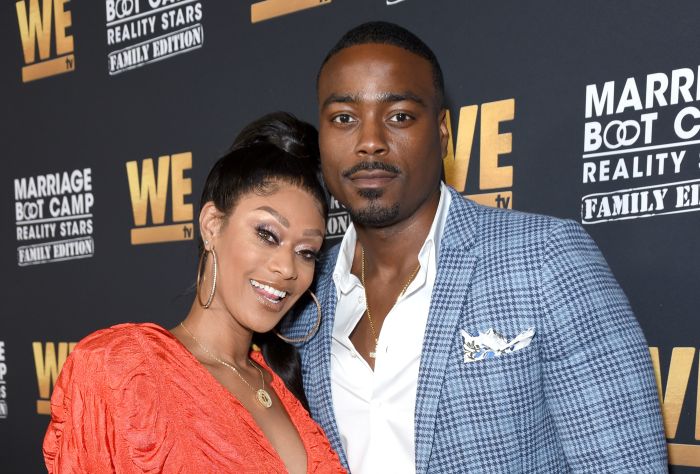 Reality star-turned-actress/comedienne Tami Roman, 51, has the internet ablaze over her interview on The Real where she revealed that she offered younger husband Reggie Youngblood, 34, the opportunity to have a baby with another woman and circle back a year or two later.

Would you give your husband permission to have a baby with another woman? Actress and reality TV legend @TamiRoman opens up about her surrogacy journey and reveals where the decision came from and whether her husband Reggie took her up on the offer. pic.twitter.com/azwWp94Zw5

In a now viral clip, Tami opened up about her and Reggie’s baby-making progress after co-host Garcelle Beauvais asked her about past plans to find a surrogate.

“I feel like I’m at a point where my career is starting to do and reward me for all of the time and my efforts that I’ve been in this business and a baby for me right now would just be the thing to do,” she said.

“So what I offered him was an opportunity for us to take a break for a year or two and let him go find someone to have a child with. And then when he has his baby, we could get back together.”

Tami went on to say she would help raise the baby if Reggie took her up on the offer which he didn’t.

“He said ‘I don’t want that,” recalled Tami who noted his insistence that he was there for her for the long run.

This comes months after Tami revealed that she previously suffered three miscarriages while trying to conceive with her significant other.

“Through the course of trying, Tami suffered three miscarriages, one of which when she was six months pregnant,” MadameNoire previously reported.

“Tami shared that pregnancy would be an uphill battle for her considering she is diabetic and has a prolapsed uterus. But after each loss, Tami claimed that she and Reggie were not ready to give up.”

Hours after the clip went live, Tami directed people interested in her “full thought process” on the topic to watch a video about her, Reggie, and their surrogacy journey on Youtube.

“So much talk about my clip from The Real. I was hoping you would understand but how could you from a 2 minute segment 😂 and you still may not understand but I hope this provides some clarity,” she wrote in the video description on Youtube.

“I love my husband and only want what’s best. He loves me and we’re just trying to be good to each other. Thank you all for your comments and to the ones who exuded love & understanding, we appreciate you 💛”

What are your thoughts about the viral saga? Tell us down below and peep the messiest reactions to Tami’s big reveal on the flip.

Tami’s husband knew she was a senior citizen when he married her, pls. Obviously having kids wasn’t that high on his list of priorities.

Tami: “So what I offered him was an opportunity for us to take a break for a year or two. Let him go find someone to have a child with and when he has his baby we can get back together.” pic.twitter.com/tL91mLDM2M

“Tami: “So what I offered him was an opportunity for us to take a break for a year or two. Let him go find someone to have a child with and when he has his baby we can get back together.” – the GIF says it all