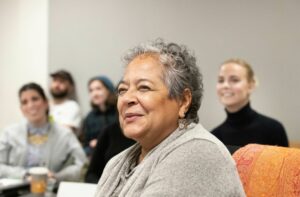 The community of Black and independent filmmakers is mourning the loss of Michelle Materre, a champion of the independent film industry who passed away from cancer last month at age 67.

Materre passed away at a hospital in White Plains, New York, on March 11, a Facebook post from The Black Documentary Collective read.

The acclaimed film historian was well known and respected for her unwavering dedication to ensuring diverse stories were told through film.

Her three decades of work impacted future generations of independent filmmakers and helped award-winning films see the light of day. While running her film distribution and marketing company, ​​KJM3 Entertainment Group Inc., from 1990 to 2001, Materre directly managed the release of 23 independent films, as noted by The New School Free Press.

Some of the projects under her belt include Chisholm ’72: Unbought & Unbossed by Shola Lynch, Channel Thirteen/WNET’s national series The Rise and Fall of Jim Crow, and Black Women in Medicine by Crystal Emery. Materre also curated Creatively Speaking, a film series dedicated to women filmmakers and people of color.

“During this period, filmmakers were typically producing totally on their own, without limited support and resources from institutions and grant-making agencies – indeed getting the work produced ‘one way or another,’” Materre shared in Black Camera: An International Film Journal in 2019.

“Yet, this work lives on and remains relevant today, fulfilling the mission of the Creatively Speaking Film Series to capture the often-buried voices, harsh realities, and boundless creativity of historically marginalized and underrepresented filmmakers of color.”

The New School professor leaves behind a community of students and supporters celebrating her life by remembering all she contributed to the independent film community.

“Michelle will be remembered as a tireless advocate and champion of films by and about women and people of color, a beloved teacher, an engaged university citizen, and a cherished colleague,” the New School wrote in a lengthy statement.

Emmy and Peabody award-winning director Neema Barnette, the first Black woman to direct a network sitcom (What’s Happening Now!), penned a Facebook tribute to Materre, honoring her for being a trailblazer for diversity in the field.

“After a friendship that spanned over 35 years, I said goodbye to my sista friend Michelle Materre. A force to be reckoned with, Michelle’s love for Third World cinema and her lecture series Creatively Speaking has helped hundreds of young visionaries make their films. A staple at The New School, Michelle taught and mentored hundreds more,” Barnette wrote.

“There will be celebrations of Michelle’s life and we will make sure her work continues. Michelle was a true warrior Queen who fought battles with bravery and hope. Rest in Power Michelle, because you know how much you were loved.”