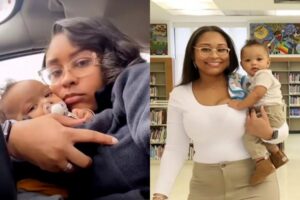 A father and husband are mourning the loss of his wife and infant son after they died from carbon monoxide poisoning while sitting inside a car.

Kellye Weathersby-Canty and her 10-month-old son were found dead inside the parking garage at the Detroit Medical Center, Fox 2 Detroit reports. Police believe the mother and son were waiting for a family member undergoing a medical procedure.

DeMarray Canty, the father and husband, is shattered by the tragedy. He and Kellye had just celebrated their union in a small wedding ceremony in April 2021 and welcomed their baby boy Kanan a few months later.

Tragedy struck his happy home on March 23 after Kellye took her mother to a doctor’s appointment at Harper Hospital. She parked the car in the medical center’s parking garage and waited inside the car with her son. But the wife and baby never made it home.

“I ended up calling her, she didn’t answer, so I called her sister back to see if she had talked to her,” he said. “I asked did she have her location?”

Canty ended up tracking the car down and when he arrived, he found his wife and son locked inside unresponsive. Eventually, with the help of others, the frantic father and husband was able to break inside the vehicle.

Medical personnel did everything they could, but Kellye and Kanan were gone.

Canty has since launched a GoFundMe page where he recalls how his life has “forever changed” while asking for assistance with covering the funeral arrangements.

“Our family was just getting started. Never in a MILLION years would I think I would be planning a funeral,” he wrote. “I need help sending my family off right.”