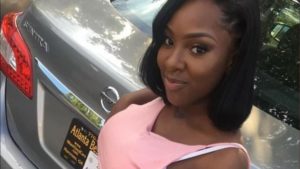 An Atlanta mother has been left heartbroken after losing her daughter and only child to an ATV accident where the driver fled the scene.

Niani Gibson was on an ATV with an unidentified man on May 16 when the driver crashed at Metropolitan Parkway and St. John’s Avenue, WSB- TV reports. However, instead of stopping and getting help for Gibson, the driver fled and left Gibson lying on the road with a gash to her head. She died a day later.

Ericka described her 26-year-old daughter as “a beautiful person, inside and out,” who left behind a 4-year-old son.

“I don’t even know what justice would look like because my baby ain’t here, and this baby has to grow up without a mommy,” Ericka said.

“He got off of the ATV and got on another one and left my baby in the street,” Gibson said, as captured by CBS Atlanta.

“We don’t know where he is, so we need you to turn yourself in,” Gibson’s friend Keona Jones added.

Now the Public Safety Commission is hoping to propose that off-road vehicles, like ATVs and motorbikes, be required to display identification like a license plate.

Ericka is devastated and reflecting on the loss of her daughter coming on the anniversary of the death of her mother, Dorothy Height, who died on May 16, 2016.

“My mama died May 16. They hit [Niani] on the anniversary of my mama’s death,” she said.