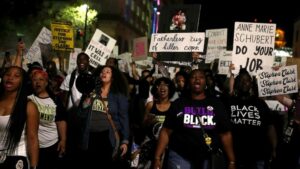 The National Urban League (NUL) released its annual report on the state of Black America Tuesday, and its Equality Index shows Blacks are still suffering from systemic racism.

According to the NUL, Black Americans have made economic and health gains but have fallen further behind white Americans in education, social justice, and civic engagement since the index was first launched in 2005.

“These numbers change so little and so slowly. What it tells me is that this institutional disparity based on race seems to be built into American society,” NUL President Marc Morial told the Associated Press.

According to the NUL, the median household income for Black Americans ($43,862) is 37% less than the average income of White Americans ($69,823). Additionally, due to redlining and racism that exists to this day, Black Americans are twice as likely to be denied a home mortgage or home improvement loan keeping them from one of the main drivers of generational wealth in the U.S. today.

While the overall health of Black Americans has improved, their life expectancy has declined slightly to an average of 74.7 years, four years less than the average white American. On top of that, the report showed some stunning inequities in health.

When it comes to educational gaps and law enforcement, the numbers shouldn’t surprise Black Americans. According to the NUL, Black and white children enter preschool equally prepared, but the educators and schools they enter are remarkably different.

The NUL also used Justice Department data to show Black Americans are more than twice as likely as white  Americans to experience threats or use of force during police encounters and three times more likely to be jailed if arrested.