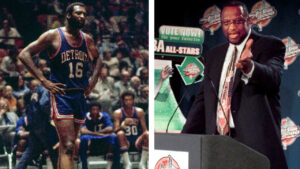 The world has lost an NBA Hall of Fame center who died at 73 on Tuesday.

According to NBA.com, Bob Lanier, one of the NBA’s top players in the 1970s, died Tuesday after a short illness. The prolific basketball player took on the role of the NBA’s global ambassador and special assistant to former NBA commissioner David Stern and current commissioner Adam Silver.

NBA Commissioner Adam Silver reflected on the NBA great when he released a statement on his passing:

“Bob Lanier was a Hall of Fame player and among the most talented centers in the history of the NBA, but his impact on the league went far beyond what he accomplished on the court. For more than 30 years, Bob served as our global ambassador and as a special assistant to David Stern and then me, traveling the world to teach the game’s values and make a positive impact on young people everywhere. It was a labor of love for Bob, who was one of the kindest and most genuine people I have ever been around. His enormous influence on the NBA was also seen during his time as President of the National Basketball Players Association, where he played a key role in the negotiation of a game-changing collective bargaining agreement.”

After he led St. Bonaventure University to the Final Four in 1970, Detroit drafted Lanier as the No. 1 pick. The All-Star center was in the NBA for 14 seasons playing for the Detroit Pistons and the Milwaukee Bucks. He averaged 20.1 points and 10.1 rebounds throughout his career. He is third on the Pistons’ career list in points and rebounds.

Lanier was inducted into the Naismith Memorial Basketball Hall of Fame in 1992.

In 1995, Lanier became an assistant coach for the Golden State Warriors, then became an interim coach the season after Don Nelson resigned. The Warriors had a 12-25 record, and the Warriors went with another coach after the season.