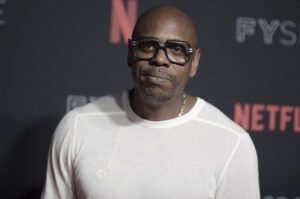 For as much as Dave Chappelle talks about being “canceled,” the money stays rolling in.

Fresh off his latest deal with Netflix earning him over $60 million for four specials – Equanimity, The Bird Revelation, Sticks & Stones, and The Closer – the comedy giant is back at it, with another four specials heading our way.

While many consider him to be one of the greatest comedians of all time, Chappelle has faced backlash for his most recent The Closer special, in which he made controversial remarks about the trans community. This prompted a trans-Netflix employee to stage a walkout in protest of removing the special altogether, which ended in their firing after leaking financial data regarding Chappelle’s payout.

The streaming service announced in a news release Friday that they will now pick up four specials executive produced and hosted by Chappelle, alongside some of his favorite stand-up comics, per NBC News.

The new Chappelle’s Home Team will debut Feb. 28, kicking off the series with comedy vet Earthquake, otherwise known as Nathaniel Martin Stroman, titled Earthquake: Legendary. Additionally, the next special will cast the spotlight on Donnell Rawlings, a fellow comic that appeared on Chappelle’s Show.

“I’ve been doing this a long time and comedians like Quake and Donnell are not only friends, but have inspired my own career,” Chappelle said in an emailed statement. “Anyone in the comedy community knows these names and knows their time to shine is long overdue.”

Netflix confirmed that Chappelle will introduce the headliner in the new comedy series.

Most recently, the comic has landed in more hot water after convincing the Yellow Springs, Ohio city council to vote “no” on advancing affordable housing. He did so by​​ threatening to pull his millions in business ventures from the town if the proposal passed, sparking further outrage on social media.