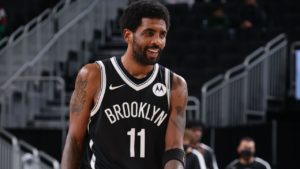 The coronavirus vaccination mandate in New York City has left Brooklyn Nets point guard, Kyrie Irving off the basketball court due to the talented, yet controversial player refusing to innoculate himself with the vaccination. NBA Commissioner Adam Silver is hoping that the current New York City mayor, former police officer Eric Adams, will take a look at possibly altering that protocol to allow Irving back on the courts in New York.

According to NBA.com, earlier this week, Silver said he believed Mayor Adams should look at the coronavirus mandate that was put in place by Adams’ predecessor, former New York City Mayor Bill de Blasio. The former mayor mandated that athletes playing in the city of New York had to be vaccinated against the coronavirus to be able to play in public venues.

Appearing on ESPN, Silver feels that “It just doesn’t quite make sense to me that an away player who’s unvaccinated can play in Barclays, but the home player can’t.” He also points out that out-of-town visitors playing for opposing teams are actually allowed to play in New York City with no penalty.

“I mean, I think if ultimately that rule is about protecting people who are in the arena, it just doesn’t quite make sense to me that an away player who’s unvaccinated can play in Barclays but the home player can’t,” Silver said.

NBA commissioner Adam Silver weighs in on the New York vaccine requirements, which have kept Kyrie Irving out of home games.

“It just doesn’t quite make sense to me that an away player who’s unvaccinated can play in Barclays, but the home player can’t.” pic.twitter.com/epMYGZhYdz

The New York mayor was approached about what Silver said about the city’s vaccine protocol.

“I think the rule is unfair. I believe that we are saying to out-of-town athletes that they can come in and not be vaccinated. Yet New York athletes, you have to be vaccinated,” Adams stated.

“But I am really, really leery about sending the wrong message. Having this city close down again keeps me up at night. And the message was put in place, the rule was put in place. To start changing it now, I think it would send mixed messages. So I’m struggling with this, just to be honest with you.”