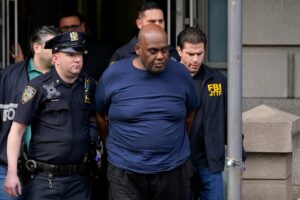 On Friday, New York City subway suspect Frank James, 62, was indicted for injuring 29 people on a subway train. He entered a not guilty plea to terrorism charges on a mass transit system and discharging a gun to commit a crime during his arraignment in a Brooklyn federal court, the New York Post reports.

James was informed of his charges and rights. He told the court he was “competent” to stand trial to face accusations that he unleashed a hail of bullets on board the Manhattan-bound N Train on April 12 after reportedly diffusing a smoke bomb as the subway approached the 33rd Street station in Sunset Park, according to the New York Post.

The Bronx native turned himself into the NYPD and was taken into custody 30 hours after the attack, Complex reports.

James ran a YouTube channel by the name of “prophet oftruth88” where he spewed racist profanity-laden rants against specific groups of people, disparaging women, and Black people, according to NBC News.

He also confessed in another video that he suffers from a post-traumatic stress disorder and criticized Mayor Eric Adams, blaming Adams for the mental health care system in the city.

“Mr. Mayor, I’m a victim of your mental health program,” James said in one video.

He also chastised the mayor for neglecting the issue of homelessness.

“Eric Adams, Eric Adams: What are you doing, brother? What’s happening with this homeless situation,” he said, referring to the subway.

“Every car I went to was loaded with homeless people. It was so bad, I couldn’t even stand. I had to keep moving from car to car.”

James is due back in court on July 25. If convicted, he faces a life sentence in prison, according to the New York Post.