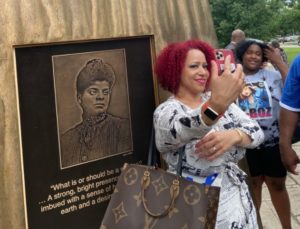 Last week, Chicago unveiled the Ida B. Wells monument on the city’s south side. Located on 3724 S Vincennes Ave, It’s the city’s first monument dedicated to a Black woman. It stands as the second tribute overall to a Black woman in Chicago. Three years ago, the Chicago Defender reported the unveiling of a bronze statue dedicated to Illinois Poet Laureate Gwendolyn Brooks on 4542 S. Greenwood in Brooks Park.

“We’re a very multicultural city and I think that the public structures and public tributes should reflect who we are as city and as a nation,” Michelle Duster, Ida B. Wells’ great granddaughter, told ABC News.

This year, Duster released Ida B. the Queen: The Extraordinary Life and Legacy of Ida B. Wells to celebrate the life and legacy of her grandmother.

Such a great day as we unveiled the Ida B Wells monument in Chicago. This Black woman journalist told the truth no matter how much power lined up against her, so, it is cosmically fitting that this happened on THIS day. pic.twitter.com/BjxkROA9Rn

The Ida B. Wells National Monument in Chicago

Officially known as The Light of Truth Ida B. Wells National Monument, the commemoration is located in Chicago’s Bronzeville community and was created by Black sculptor Richard Hunt. It stands on the land of the former Ida B. Wells Housing Project — a construction developed to house Black families. The homes were demolished in 2011. Now, the area serves as a memory of where Wells spent most of her life as an investigative journalist in Chicago.

“Most people still don’t know what she did,” said Daniel Duster, great grandson of Ida B. Wells. “And so the fact that Chicago has decided to honor her and it’s been 13 years in the making, I have a feeling of joy, excitement, appreciation and humbleness.”

Wells was a renowned journalist, activist, and newspaper editor. She co-owned The Memphis Free Speech and Headlight and became known as a truth teller. She used her writing talents to shed light on the lynching of African Americans across the South in the late 19th century, The Associated Press reported. Her 1892 speech inspired the name of the sculpture. In her speech, she said, “The way to right wrongs is to turn the light of truth upon them.”

Commissioned by the Ida B. Wells Commemorative Committee, the The 20-foot-tall structure represents an abstract representation of Wells.

“We wanted people to be able to interpret for themselves part of who she was—connect it with them,” Michelle Duster told the Chicago Tribune.”

The group raised $300,000 over several years to cement Wells’ name and contributions in Chicago’s history. This commemoration also included the renaming of Congress Parkway to Ida B. Wells Drive in Chicago’s business district in 2019.