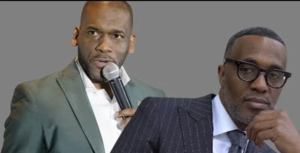 Even beyond the grave, Kevin Samuels continues to tap on the nerves of his most ardent critics, notably Pastor Jamal Bryant of New Birth Missionary Baptist Church in Georgia, according to Hot New Hip Hop.

Bryant took the podium and denounced the teachings of the late Samuels; although he never publicly said his name, his congregation quickly deduced who he was referring to when questioned, “How can a man say that you are of low value after 35? How can a man say that you don’t have the level of traction of a high powered man when that man has to get a GoFundMe for his funeral?”

Supposedly, Samuels’ friend Melanie King created the GoFundMe to help cover funeral expenses. However, it was discovered she was a scammer, and his family claimed that they had never heard of her. The campaign is no longer available. Samuels was reportedly worth $4 million and owned luxury cars.

Yet, celebrities like R&B singer Omarion and Atlanta rapper T.I. have expressed online that the ongoing criticism of Samuels is unnecessary.

“It’s sad when people can’t respect “the family” after losing a loved one. He’s no longer here. Why add insult to injury? What about the people that loved him- like his mom?”

“They gotta see this or hear about it. This is disgusting & wack asf. Regardless of his views, he didn’t kill nobody. We all need to have more compassion. This is why I don’t attend these “fake” places of worship. Respectfully,” posted the “Ice Box” crooner on an Instagram page.

T.I. also came to the defense of the controversial YouTuber and said he was fed up with the online discourse about Samuels which he considered “bullying.”

“The shit is f–king a travesty of justice,” said the rapper. “I can’t stand it, I can’t stand it. I ain’t gon’ let y’all bully this dead man. We gon’ let this man rest in peace.”

He added: “Whatever he did, he did it and [he’s] gone. He got away with it, f–k ya. That’s between him and God. Him and the Lord gon’ have to deal with it. You ain’t got no heaven or hell to put him in.”

On May 5, Samuels was found unresponsive on the floor of his Atlanta apartment, and the cause of death is not known, according to The New York Times.