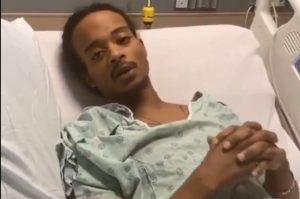 Two years ago, a Black man was shot in broad daylight by a police officer as he approached his vehicle with his children inside in Kenosha, Wisconsin. The unarmed man was paralyzed due to the shooting, and he filed a federal lawsuit against the police officer who shot him. This week, he dropped the lawsuit.

According to The Associated Press, police shooting victim Jacob Blake has dropped his federal civil rights lawsuit against the Wisconsin police officer, Rusten Sheskey, who shot him. The shooting left Blake paralyzed from the waist down.

The reason he dropped the lawsuit is unknown.

A person at the office of Blake’s attorney, Patrick Salvi II, hung up when questioned about why the lawsuit was dropped. Sheskey’s attorney, Kenneth Battle, had no immediate comment.

Two years ago, in August, video footage showed an unarmed Blake being shot in the back multiple times by white police officers in front of his children as he entered his vehicle in Kenosha, Wisconsin, according to Revolt.

Sheskey, who is white, shot Blake after Blake attempted to enter the vehicle his children were in at the time. Police officers stated Blake was wanted on a felony sexual assault warrant at the time.

Wisconsin prosecutors cleared Sheskey of any criminal wrongdoing and dropped the sexual assault charges against Blake as part of a plea deal. Blake filed his lawsuit last year in March 2021, alleging that Sheskey had used excessive force.

According to court records, attorneys for the two men filed notice last Friday that they had agreed to dismiss the case with prejudice. Blake can’t refile another lawsuit against Sheskey. U.S. District Judge J.P. Stadtmueller ordered the case dismissed Monday.

A year after the incident was caught on video, Blake stated that he was hopeful he would walk again.

“I’m here, and yeah, I’m about to be walking, but I really don’t feel like I have survived because it could happen to me again,” Blake admits. “I have not survived until something has changed.”