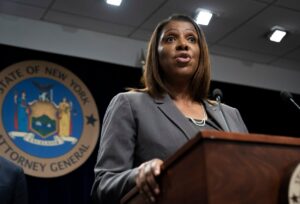 In addition to Amazon’s Twitch, James’ office will also probe 4chan, 8chan and Discord. Investigators will look into the online resources the gunman “used to discuss and amplify his intentions and acts to carry out this attack.”

“Time and time again, we have seen the real-world devastation that is borne of these dangerous and hateful platforms,” James said in a statement.

“We are doing everything in our power to shine a spotlight on this alarming behavior and take action to ensure it never happens again.”

Gendron live streamed the mass shooting on Twitch on Saturday. Twenty-two people viewed the live stream before it was removed, The Washington Post reported.

On Thursday, New York Governor Kathy Hochul confirmed the investigation while noting the “responsibility” social media platforms should take in incidents of this nature.

“Social media platforms must take responsibility and be held accountable for favoring engagement over public safety.”

I've issued a referral to @NewYorkStateAG to investigate social media platforms that broadcasted the horrific attack in Buffalo and legitimized replacement theory.

Social media platforms must take responsibility and be held accountable for favoring engagement over public safety.

Gendron is believed to have released a 180-page manifesto detailing the mass shooting where he credited racist memes and discussions found on 4chan with influencing him, NPR reported. The manifesto was posted on Discord by a user with the name Payton Gendron.

While the initial focus will be on only four social platforms, James warned that more tech platforms could be added to the investigation.

“The fact that an individual can post detailed plans to commit such an act of hate without consequence, and then stream it for the world to see is bone-chilling and unfathomable,” James said.

“As we continue to mourn and honor the lives that were stolen, we are taking serious action to investigate these companies for their roles in this attack,” she added.