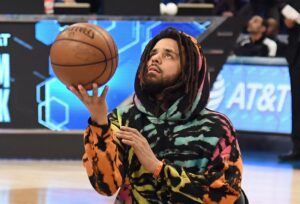 Following his professional debut as a basketball player last year, rapper J. Cole is returning to the hardwood. After playing in Africa, the 6′ 3″ guard will take his talents north to Canada.

According to The Canadian Elite Basketball League (CEBL), which claims to be the largest league of any professional sport in Canada, J. Cole has signed with the Scarborough Shooting Stars.

This marks the second time the rapper has signed to play basketball in a professional league. He made his debut in the inaugural season of the Basketball Africa League, which has a partnership with the NBA, as a member of Rwanda’s Patriots Basketball Club last season.

According to The Sporting News, J. Cole played in only three basketball games for the Patriots before leaving the team for “family reasons.” He did fulfull his contractual obligations by participating in the three games before leaving, scoring five points, dishing out three assists, and grabbing five rebounds before departing the league.

The Canadian Elite Basketball League was started in 2017 and began competing in games in 2019.

The CEBL has 10 teams from six different provinces. Five are from Ontario; the remaining teams are from British Columbia, Alberta, Saskatchewan, Quebec, and Newfoundland and Labrador. This makes the CEBL the largest professional sports league based entirely in Canada.

The season will start official league play  May 25. The regular season will consist of each team playing 20 games before the playoffs start. The league runs through to August.

Of course, J. Cole is not the only rapper to give pro hoops a shot. Master P chased his own dreams in the 1990s.