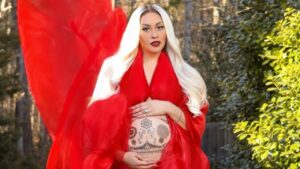 R&B singer and songwriter Keke Wyatt and her husband, Zackariah Darring, expect their second child together in the couple’s growing family. Wyatt, a mother of 10,  took to social media with the announcement.

Ecstatic about the news, Wyatt posted a maternity photo of herself in a red flowing gown with a cut-out that reveals her growing baby bump. “My husband, Zackariah David Darring and I are proud to announce that our family will be adding a “plus 1” to the Wyatt Bunch!” she captioned the photo.

The 39-year-old has been married to Darring since 2018, following her divorce from Michael Ford, according to Essence. The pair announced the birth of their first child together on social media, writing, “My husband Zackariah and I are blessed to welcome our beautiful and healthy 7 lb 11ounce son, Ke’Riah Darring,” she writes. “He came to our family on 1/6/2020.”

Wyatt has eight children from her previous relationship with Ford and one from her first marriage to Rahmat Morton.

In a separate post, Wyatt shared two family pictures of the “Wyatt Bunch,” noting that their daughter Kayla Ford “wasn’t available for the picture but you’re with us in spirit Shuga!”

The Indianapolis native says that she believes that God blessed her with the gift of motherhood. She told the Christian Post in 2017, “I think I have an anointing on motherhood. I know it sounds funny, but I really think that it’s a gift of mine. That’s one of my many gifts [and] talents.”