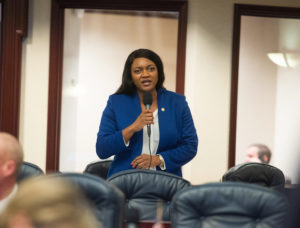 Driskell, who won Tampa’s District 63 in 2018, will lead state Democrats from 2024-2026, meaning she will have to be reelected next year. The Georgetown and Harvard graduate said she is honored to lead state Democrats and it shows the country is beginning to pay more attention to what Black women can do.

“I’m just so glad to get to be a part of that narrative and be a part of that story. And to have this chance to work for a brighter future for all Floridians,” Driskell said according to WMNF. “And really just leverage this platform to continue breaking down barriers and hopefully inspire more young people to want to run for office, and women of color to do it. If they see me doing it, hopefully, they’ll think that they can do it too.”

Driskell was one of the most outspoken opponents to Gov. Ron DeSantis‘ anti-protest bill HB 1 and worked with Republican lawmakers on police reforms bills including HB 7051.

Driskell is currently serving as the  House Democratic Caucus Policy Chair for the 2020-22 term and her appointment is another sign of Black women winning in 2021. Earlier this week Karine Jean-Pierre became the first Black woman to lead a White House presser in 30 years. Additionally, there are a record 117 Black women serving in Congress this year.

House Democrats also voted Rep. Ramon Alexander to lead the Caucus in the absence of Rep. Ben Diamond who is making a run at a congressional seat. Alexander, a Florida A&M University graduate is the first Tallahassee-area Representative to serve in a leadership role since 1978 according to Florida Politics.

Florida was one of the most affected by the coronavirus as its travel, bar and restaurant, cruise and hotel and hospitality industries were all hit with massive layoffs. That led to issues in signing up for unemployment benefits as former Gov. Rick Scott designed the state’s unemployment system to fail, according to Florida’s current governor.