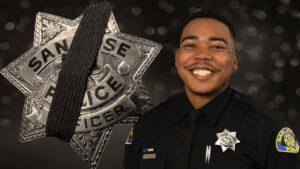 An autopsy report has been released stating that the cause of death of a San Jose rookie police officer was a fentanyl drug overdose.

According to NBC Bay Area, the Santa Clara County Medical Examiner’s office announced that an overdose of the drug fentanyl caused the death of San Jose police officer De’Jon Packer.

The 24-year-old Packer, who was also a star running back at San Jose State University, was found unresponsive when police officers from Milpitas went to check on him while conducting a welfare check at his place of residence last month on March 13.

It was reported that Packer was seen at a party with fellow police officers the night before he died.

The San Jose Police Department released a statement on Saturday:

“Today, the Santa Clara County Medical Examiner’s Office confirmed the cause of death for Officer De’Jon Packer. The full details regarding Officer Packer’s death are still not known and are being investigated by the Milpitas Police Department and they have our full cooperation. This behavior is not something we condone, and we will continue to assist Milpitas PD with their investigation.

“Any allegation of illegal drug use by a San Jose Police Officer is concerning. There are no free passes for police Officers, and we will not make excuses. When an Officer violates the public trust, on or off duty, I will hold them accountable. I have stated that since the day I took the oath of leading this great agency as Chief of Police. The public demands and I expect ethical behavior, accountability, and professionalism from all who wear the uniform. I will continue to ensure we keep the trust of the City, and the community members we serve.”

Sources closely connected to the case mention that the police officers at the party could face an internal investigation. They also stated that a criminal probe investigation might also be in the works.

Parker’s family has also released a statement to ABC7 News:

“On behalf of DeJon’s mom, Sonya Steptoe, and family, we are shocked and heartbroken upon learning of DeJon’s cause of death. There was no indication that DeJon was involved in illicit activity and he was heavily against it as evidenced by his chosen profession. He joined the San Jose Police Department to make a difference in his community and did not want the police to be seen as a negative entity. It is our understanding that even the smallest trace of Fentanyl is lethal and can cause harm, and our family will be closely following the Milpitas Police Department and San Jose Police Department’s investigation of the circumstances surrounding his death.”