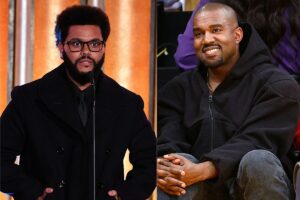 After Kanye West pulled out of the upcoming Coachella festival, organizers immediately went and found a suitable replacement in The Weeknd, who wanted Kanye’s salary—and got it.

According to PageSix, to combat any fallout from Ye not being at next week’s Coachella Festival, organizers of the popular annual showcase announced that The Weeknd would perform in his place.

Coachella organizers announced early Wednesday that The Weeknd and house music supergroup Swedish House Mafia would take over for West on Sunday, April 17, and Sunday, April 24.

Yet, the deal wasn’t written in stone yet, according to a music source who told Page Six.

The source said, “The Weeknd came in at short notice to take Kanye’s top spot. But Phil Anschutz [who owns the Coachella Festival through AEG Live] wanted to hold on to Kanye’s money and pay The Weeknd far less, just a few million. The festival would pocket the rest.”

With The Weeknd placing his line in the sand, negotiations between his management and Anschutz’s company Goldenvoice, which produces the festival, had gotten tense.

According to the same source, “Even after Coachella announced the new lineup on Wednesday, a deal wasn’t in place for The Weeknd, who threatened to pull out at an hour’s notice if he didn’t get the same deal as Kanye. Finally, on Wednesday—faced with the prospect of a second headline act pulling out of Coachella at the last minute—Anschutz’s company caved and agreed to pay The Weeknd the same money.”

Ye’s departure from Coachella could be related to his stormy personal life. Over the weekend, according to Page Six, Ye shared with his former wife, Kim Kardashian, that “he’s going away to get help” following his months-long harassment on Instagram targeting the reality star and her boyfriend, Saturday Night Live star Pete Davidson.