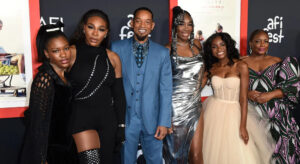 The 94th annual Academy Award nominees have been announced!

Upon hearing the news, Williams couldn’t wait to share her excitement.

“I woke up to this. Our film is really nominated for an OSCAR!!!!!!!” the tennis great captioned a photo from the film on Instagram.

“This is CRAZY!!!!!!! From Compton to Wimbledon to Academy awards,” Williams added. “Everyone can dream. And your dream can come true. Ok I am definitely crying this morning. Congrats to the entire film and crew.”

The 23-time Grand Slam singles champion, one of the film’s executive producers, went on to thank and congratulate the entire film and crew.

Will Smith, who plays the Williams sisters’ father, Richard, received a Best Actor nomination for his role. As a producer of the film, he also shared another nomination in the film’s Best Picture category with Tim White and Trevor White.

Aunjanue Ellis scored a Best Supporting Actress nomination for her role as Oracene Price, mother of the Williams sisters, in the film.

Williams also extended her gratitude to Beyoncé, who earned her first Oscar nomination for Best Original Song for “Be Alive,” a ballad she wrote for the King Richard soundtrack. According to The New York Times, the song was co-written with songwriter Dixson and plays during the end credits while featuring footage of the real Williams family.

“Congrats to EVERYONE I did not “@” as I am so emotional,” Williams added.