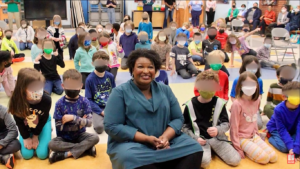 Voting rights advocate and Democratic candidate for Georgia governor Stacey Abrams has come under fire after a deleted tweet featured her unmasked surrounded by masked schoolchildren.

According to CNN, the photo was taken at Glennwood Elementary School in Decatur, Georgia. It was tweeted by principal Holly Brookins, who called it an “extraordinary way to kick off the 3rd Annual African-American Read-In at Glennwood and Black History Month. Thrilled to host @staceyabrams author of Stacey’s Extraordinary Words!”

Abrams quote-tweeted the photo, thanking the principal for hosting her. Both images have since been deleted, and Brookings has deactivated her account.

The photo has angered many in the state, especially those who have repeatedly voiced frustration at masking policies in the state. The city of Decatur has an indoor masking policy that runs through the end of the month, and the city’s schools have a similar mask policy.

Abrams responded to the incident Sunday, taking aim at those who chastised her in response to the photos and outlining worse moves politicians in the state have made in response to the virus. The Abrams campaign said she did enter the school with a mask but removed it so the students could hear her.

“It is shameful that our opponents are using a Black History Month reading event for Georgia children as the impetus for a false political attack, and it is pitiful and predictable that our opponents continue to look for opportunities to distract from their failed records when it comes to protecting public health during the pandemic,” the campaign’s statement said according to CNN.

“One of Stacey’s opponents downplayed the virus while trading stock to profit off the pandemic after his private coronavirus briefings as a Senator. Another of her opponents attacked mayors seeking to protect their citizens and has failed to expand access to Medicaid even as rural hospitals close. This pathetic, transparent and silly attack is beneath anyone who claims he wants to lead Georgia.”

Among those who criticized Abrams for the photos were Georgia Gov. Brian Kemp and former The View host Meghan McCain.