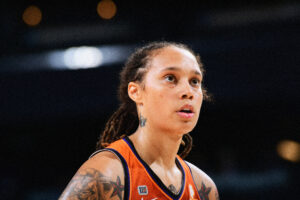 On Tuesday, the U.S. Department of State determined that WNBA star Brittney Griner is being “wrongfully detained by the Russian government.”

The change in official classification will garner a more aggressive approach to ensuring her safe release and return to the United States, NBC News reported.

Roger Carstens, the special presidential envoy for the U.S. Special Presidential Envoy for Hostage Affairs (SPEHA), will now oversee the case in coordination with the State Department’s Office of Consular Affairs.

Griner has been in Russian custody since February after a search of her luggage at an airport near Moscow found vape cartridges containing cannabis oil. If found guilty of the drug smuggling charges, Griner could face a 10-year sentence.

“The welfare and safety of U.S. citizens abroad is among the highest priorities of the U.S. Government,” a department spokesperson said in a statement Tuesday.

While authorities work to get Griner released, the State Department will continue to “undertake efforts to provide appropriate support to Ms. Griner.”

The SPEHA office handles the government’s diplomatic efforts in securing the release of American citizens wrongfully detained in other countries. Their classification change means more flexibility in efforts to negotiate Griner’s freedom since SPEHA doesn’t have to wait for Russian legal proceedings to secure a release, CNN reported.

“When it comes to our efforts to free Americans, the Special Presidential Envoy for Hostage Affairs Ambassador Carstens, he will go anywhere, he will talk to anyone if it means that we’re able to come home with an American, to reunite that American with her or his family,” State Department spokesperson Ned Price said.

Last week, Carstens and his team played a major role in securing the release of U.S. citizen and former Marine Trevor Reed from Russia. The Richardson Center, which was also involved in Reed’s release, is also working on behalf of the Griner family to try to secure her release.

The Phoenix Mercury star has a hearing scheduled for May 19.