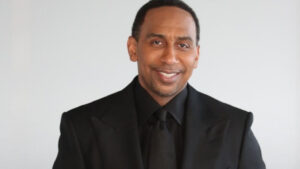 The First Take host ripped into Simmons, who hasn’t played one game this season after becoming disgruntled with his former team, the Philadelphia 76ers, and landing with Brooklyn during the season.

Basketball fans throughout the world have watched Simmons through his struggles in Philadelphia, which included passing up an open lay-up in a critical playoff game last year, and sitting out this season. Now that he is with the Nets, Simmons still hasn’t hit the court and the team is facing elimination, down 3-0 to the Boston Celtics. Game 4 is tonight in Brooklyn.

Smith’s frustration boiled over after news surfaced that Simmons wouldn’t play in Game 4. .

“I feel bad for anybody who was his teammate,” Smith while discussing the matter during halftime of Sunday’s Golden State Warriors and Denver Nuggets playoff game.

“He quit on LSU (Louisiana state university). He quit on the Philadelphia 76ers. And now, he ain’t showing up for the Brooklyn Nets. We can point to all the excuses, all the rationale behind it that we want to. I do recall, despite him not playing, he still filed a grievance to collect $20 million that he has not earned.

“This is one of the most pathetic situations I’ve ever seen in my life,” Smith continued. “He ain’t going to war. He ain’t going into the octagon. He’s not going into the boxing ring. It’s pulling teeth to get this man to play basketball. It’s pathetic. It’s sad. And at the end of the day, when the NBA gets in the collective bargaining table, and they go after the players in terms of a pay-for-play stipulation in the collective bargaining agreement, it’s going to be called the Ben Simmons Rule.”