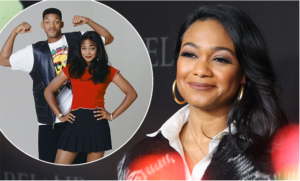 While the internet remains divided over the now infamous Will Smith five-finger fiasco slapping Chris Rock across the face, one of his former castmates is pretty solid on which side of the fence she’s on.

Tatyana Ali who played the exuberant younger cousin to Smith on the NBC hit show, The Fresh Prince of Bel-Air, has finally spoken out about how she feels about the shocking turn of events at the Academy Awards. Ali says that while she still supports Smith, his actions were dead wrong.

She began, “Took me a while to get my thoughts together. Right is right, wrong is wrong, and love is love.”

Ali went on to say in part, “I love Will Smith very much. Chris Rock didn’t deserve to be hit. Period. My heart aches for what happened.”

So far, Ali and Janet Hubert, the original Aunt Viv, are the only former castmates to speak up in support of Smith. But Ali is the first to offer some form of condemnation for his actions.

Hubert put out a statement defending the King Richard star’s Oscar’s slap saying, “So PROUD OF YOU!” Hubert wrote on Instagram.

“Yes, there is only so much one can take…sometimes you have to slap back. Celebrate the win…nothing else matters. Both actions were incorrect but Chris didn’t need to go there.”

Hubert also took a deeper dig at Rock saying, “Met him once…. it was enough for me…. very mean spirited.”

Oscars Producer Will Packer Unpacks His Feelings Over Debacle

First-time Oscar producer Will Packer took to social media to comment on his entry into the televised award show. Without directly mentioning the Will Smith/Chris Rock fiasco, he did admit that the moment hit him deeply.

With Sunday’s telecast, the movie and television producer Will Packer made history when he led the first all-Black production team in Oscars history. Sadly, that will be a footnote as everyone continues to talk about Smith slapping Rock in the face on stage at the Academy Awards presentation.