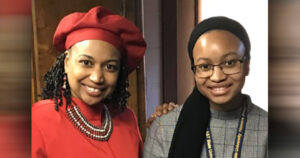 Nationwide — In a 1962 lecture in Los Angeles, California, Malcolm X said, “The most disrespected person in America is a Black woman.” Today, a teacher and her daughter are helping to change the view of Black women from a “disrespected state” to one of “honor” with the establishment of Mothers of Civilization Day.

The idea for the new holiday was developed by Audrey Muhammad, an educator and writer who has always taught the value of Black History in her high school literature classes in Ohio and California. Her daughter, Hasana Muhammad, is a junior Computer Science major at North Carolina A & T State University, designed the website and book for the new holiday. They are hoping that schools and colleges will help celebrate the new holiday this year.

“Every year we honor our mothers who gave birth to us, but we often do not think of the woman who gave birth to humanity, which is the original woman, the Black woman,” said Mrs. Muhammad who is the editor for Virtue Today Magazine, a positive women’s magazine. “Did you know that the oldest bones to be found, as of this date are of a Black woman?” The bones were found by an anthropologist named Donald Johanson and his assistant Tom Gray on November 24, 1974, in Hadar, Ethiopia. According to Dr. Cheikh Anta Diop, the evidence of early humans who lived between 2 and 6 million years ago come totally from Africa. Since the bones of the earliest female were found on November 24, 1974, that day will be used to celebrate Mothers of Civilization Day.

The new holiday was launched in the National Days Archives and the book describing the history behind the new holiday will be available later this month. The book shares the history behind “Mothers of Civilization Day,” the new holiday for Black and Indigenous women around the world. It includes comments by Dr. Ava Muhammad from the launch event and highlights women like Michelle Obama, ancient Egyptian women, and many others! Mothers of Civilization Day is a day to recognize and be thankful for the first women on the planet, the original women, regardless of their ethnic background. Original women are women of color from Africa, North America, South America, Asia, etc. These women have kept traditions alive, taught customs, and created a beautiful culture of love and pride.

How do you celebrate “Mothers of Civilization Day?” It is a day that you take the grandmothers, mothers, sisters, and aunts and put them in a “circle of love” and have each family member share a positive word about each woman. It is also a time for a history lesson and to let the children know that they are looking at the first women to be on the planet. You can do this at a family gathering or on a Zoom. Some may even celebrate it during that Thanksgiving weekend since many families will be together. It is a non-religious, non-commercialized Holiday. More information about the day can be found on the National Archives Day website, which now lists it as a national day at www.nationaldayarchives.com/day/mothers-of-civilization-day/

The day is gaining support since the official launch party for the event that was held last year in November via Zoom. Honors are pouring in from around the country and will be featured in the first Mothers of Civilization book, which may be pre-ordered on the website.

The honor will be placed in their listing and stay on the website forever. In this digital world, children and grandchildren can now read about their mothers, grandmothers, sisters, etc. Virtue Today Magazine is the media sponsor for the day. To support the day, sign up to be on the email list at VirtueTodayMag.com.

This story first appeared on Blacknews.com.