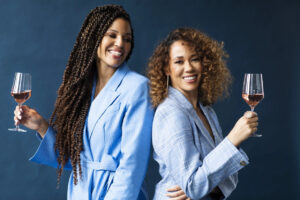 For the McBride sisters, owners of the largest Black-owned wine company, little did they know that meeting one another through their father’s dying wish would ignite the spirit of entrepreneurship and pave the way for other Black woman winemakers.

According to TODAY FOOD, Andréa McBride recalls the day she received that fateful phone call from her estranged father, who was struggling with a terminal diagnosis of stomach cancer at the time. She was just 16 years old and living in foster care in New Zealand. Before his passing, he wanted to reconnect Andréa to her half-sister Robin, whom he lost touch with after divorcing Robin’s mother. He died seven months later before he could find Robin but managed to reconnect Andréa to his family beforehand in Alabama.

“It was crazy and awful and amazing sort of all at the same time. It was all the feels,” Andréa said of attending her father’s funeral in Alabama.

“Losing our father, he was one of 12, meeting family and a lot of people that I’d never seen before but looked a lot like me. It was amazing. They were all just really focused on helping to try and find Robin.”

After some subsequent years, Robin of Monterey, California, received a letter from the ambitious family and reached out. As fate would have it, Andréa was currently in Alabama visiting.

“Andréa gets on the phone and we’re both pretty stunned and shocked because nobody thought that this was going to be happening at this moment because, according to the letter, she is in New Zealand; she’s not in Alabama,” said Robin.

One discovery would bind Andréa and Robin’s forthcoming sisterhood and partnership during the introductions. The love of wine was mutual. Though continents apart, they were both raised in small agricultural towns known as the wine regions of Monterey, California, and Marlborough, New Zealand.

The rest is history. The McBride Sisters Wine Collection was born in 2005 without any investments but $1,800 to cover licensing paperwork. To date, the flourishing company has grown into what is not only the largest Black-owned wine company in the United States but one of the most inclusive, accessible, socially aware, and sustainable.

“A lot of our experiences of us being curious about wine and how we were treated when we were in those tasting rooms and stuff is really a lot of the foundation of what our company is built on today, which is making wine accessible for everybody and helping people on their journey and making it fun,” said Andréa.

“It’s definitely an old boys’ club,” Robin added. “A large part of the industry is run by a very small group of older white wealthy men. There’s a lot of dynasties in wine. And a large part of opportunities and success has come from being associated with those people and those families.”

The McBride sisters are on a mission to bring more women of color into the winemaking industry. Among their efforts is the launch of the SHE CAN Fund in 2019, where they have invested more than $3 million in women in the food and wine industry. In March, they also launched a new initiative that funds scholarships for women in agricultural programs at Southern University, an HBCU in Louisiana.

“When we first started, (the wine world) was definitely a place where we felt like we didn’t belong,” said Robin. “And now we do.”