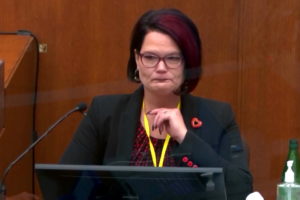 The high-profile care against Derek Chauvin,  the fired Minneapolis officer charged in the death of George Floyd, appears to be an emotional ordeal for individuals like Courteney Ross. CBS News reported that Ross was first on the stand, on the fourth trial day. Ross was George Floyd’s girlfriend. She tearfully spoke about their close relationship, while explain to the jury how the pair met. Ross spoke about Floyd’s ‘great, raspy Southern voice.’ She reaching under her glasses, dabbing her eyes with tissue, speaking about Floyd.

According to Ross, she was not okay when she first crossed paths with him. She spoke about the time in her life while she was waiting for her son’s father. Floyd reportedly asked how she was doing. According to trial footage, Ross was referring to the time when she met Floyd at a Salvation Army shelter in August of 2017. Floyd also was a security guard at a Salvation Army.

“Well can I pray with you?” Ross said, recalling Floyd’s words, while explain how tired she felt, upon meeting Ross.

‘We’d been through so much. My sons and I. And (for) this kind person just to come up to me and  say, ‘Can I pray with you, when I felt alone in this lobby. It was so sweet. At the time, I had lost a lot of faith in God,” Ross continued, revealing that he asked for her number, and gave her a first kiss.

On the first date, she found out that Floyd was from Houston, and he was new to Minneapolis. Ross said she continued to be in a relationship with Floyd, until his death. On the witness stand, she dabbed her nose with tissue, explain that she and Floyd saw each other nearly every day. She explained how they liked to go to a sculpture garden and enjoy the outdoors, while walking around. They also ate a lot. Floyd also liked running, biking and playing sports. Ross said he was physically active, although he had injuries.

Both Ross and Floyd were reportedly battling opioid addiction. With a steadier voice, Ross described their story as “ a classic story of how many people get addicted to opioids.” Floyd’s girlfriend explained that she and Floyd both suffered from chronic pain. Hers was in her neck, while Floyd’s was in his back. They both fell into a prescription addiction pattern, although they tried to break it many times, even attempting to overcome the struggle together.

“Addiction, in my opinion is a life-long struggle, so it’s something that we dealt with every day,” Ross said.

She further explained that the couple had purchased them from the black market on the street. Trial footage of Ross was uploaded by Kare 11 on YouTube. It can be viewed below.