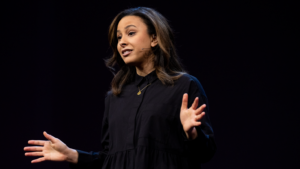 Tiana Epps-Johnson, a co-founder and executive director with the Center for Tech and Civic Life, has been leading efforts to make US elections more inclusive and secure since 2012.

Now this Black woman civic technologist is audaciously harnessing the power of technology to modernize US elections through an initiative that strives to encourage the world’s inspirational changemakers.

The Audacious Project, housed at TED, is a nonprofit comprised of several respected organizations and individuals in philanthropy. On April 11, the Project announced its commitment to distribute more than $900 million to several projects, including Epps-Johnson’s Chicago, Illinois-based center-left election reform advocacy group, Center for Tech and Civic Life.

In listing its 2021-2022 grantees, the Project released a statement. “These projects reflect continued collaboration between a group of global partners, philanthropic organizations, and determined individuals who believe in the power of pooling significant, long-term resources in service of impact. Our hope is that this inspires others to engage in the work too.”

The Audacious Project and the Center for Tech and Civic Life both have the same goals in mind, which is to solve the central problem affecting the numbers of voting as well as the process.

“American democracy has long been considered a model for the world. But when voters try to cast their ballots, they often experience unnecessary roadblocks and glitches caused by administrative, logistical, or technological gaps,” states the official website. “The quality of elections in the US is shaped by hyperlocal budgets, policies and laws — which means there is no standardized voting experience or shared performance expectations.”

With the funding, Epps-Johnson shared during a TED 2022: A New Era in April that $80 million would be allocated to several election departments throughout the United States, the Washington Post reported. The funding will be distributed through the newly launched Alliance for Election Excellence while also providing coaching and other support to a select group of local election officials who apply to the program and  pass a verification and review process.

Epps-Johnson hopes that the support will directly restore trust and accessibility in our democracy by ensuring that local election offices receive the critical resources needed to safely serve every voter.

“The electoral infrastructure of the United States is collapsing,” Epps-Johnson announced in her speech at the TED conference, according to Good Word News. “Election officials who serve millions of voters lack the basic technology they need to do their jobs reliably. It doesn’t exist, or it’s scandalously outdated.”