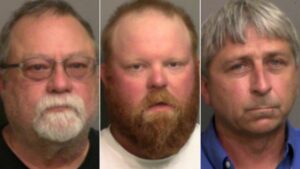 The three men convicted of killing Ahmaud Arbery have been found guilty of a federal hate crime and other charges.

On Tuesday, a federal jury in Georgia found father and son Greg and Travis McMichael and their neighbor William “Roddie” Bryan guilty of all of the federal charges they individually faced, NBC News reported.

The charges include violating Arbery’s civil rights and attempted kidnapping. The McMichaels were charged with the use of a firearm to commit a crime.

It took a day of deliberations for a jury eight white people, three Black people, and an Hispanic person to reach a verdict. The conviction came one day before the second anniversary of Arbery’s February 2020 murder.

A shocking video showed the McMichaels and Bryan chasing Arbery down in their pickup trucks after seeing him running in their coastal Georgia neighborhood. The three men cornered Arbery before Travis McMichael fatally shot him with a shotgun.

At the heart of the case was whether or not race was a contributing factor to why the three men sought Arbery out and killed him, NPR reported. Last month, the men were sentenced to life in prison after being convicted of killing Arbery.

“As a mother I will never heal,” Arbery’s mother Wanda Cooper-Jones said. “They gave us a small sense of victory, but we will never get victory because Ahmaud is dead.”

The federal charges carry a maximum life sentence. The defendants have just 14 days to file appeals for a future sentencing hearing.