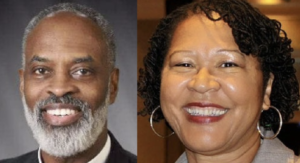 Two pastors face 20 years in prison after defrauding the federal government of $14 million in loans.

Sheila Quintana, 67, and Staccato Powell, 62, were arrested and indicted on wire fraud and conspiracy charges after securing the loans under false pretenses. The mendacious pastors, who were leaders of the African Methodist Episcopal Zion Church (AME Zion), served as officers of the governing Episcopal district churches in the Western part of California or Western Episcopal District (WED).

Authorities claimed the two heathens bilked the federal government out of $14 million by seizing control over various temples and using the churches to access the funds that only benefitted them. Quintana and Powell scammed the government from October 2016 to July 2021. The courts made the records public on January 25.

The LA Times reported that the prosecutor released a statement regarding the egregious act.

“The indictment alleges that Powell and Quintana conspired to defraud AME Zion Church congregations in Oakland, San Jose, Palo Alto, and Los Angeles by re-deeding the local congregations’ properties in the name of WED Inc.”

Powell, who was a bishop in the church, was charged with one count of mail fraud and, both he and Quintana were indicted on various counts of wire fraud and one count of conspiracy to commit wire and mail fraud.

When the elaborate scheme was first initiated, the churches involved had little to no debt. Quintana and Powell allegedly falsified bank statements, left out pertinent information and created fraudulent documents to prove that the congregations agreed to the new mortgages.

The terms of the mortgages had astoundingly high-interest rates, and the pair used the church buildings as collateral. Proceeds from the mortgages went to Quintana and Powell for their benefit.

Quintana fronted the money to her husband, while Powell used the cash to buy properties in North Carolina. He also paid off an existing mortgage.

The shysters’ scheme unraveled in 2019 when the loans on the churches began to default. AME Zion Church leaders demanded that Powell relinquish the property deeds to their respective churches.

“By mid-2020, all of the hard money loans were in default, and WED Inc. filed for Chapter 11 bankruptcy protection,” the indictment said.

The wayward bishop was arrested in Wake Forest, North Carolina, on January 25. And his shady accomplice was arrested in Vallejo, California. They are scheduled to appear in a Northern District court in California via Zoom on February 2, 2022.

The Rev. Kaloma Smith, the pastor at University AME Zion, said, “We are grateful to the Federal Bureau of Investigation for bringing this case forward. We are grateful that somebody heard our cry and started moving on that, and we are grateful for those in the community who knew and supported us.”