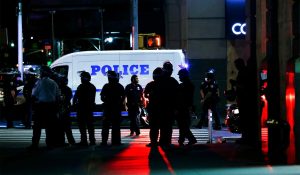 Two current New York Police Department officers and a retired officer, all from the 105th Precinct in Queens, are facing criminal charges for an alleged heroin trafficking operation.

The officers in question are Heather Busch, Robert Hassett, and Robert Smith. The latter, retired since March 2020, has been exposed as being the group’s racist ringleader, NBC News reported. They were arrested Tuesday by the Federal Bureau of Investigation on charges of bribery and drug trafficking.

“As alleged, the defendants shamelessly violated their oaths of office and the public trust by trading their badges for cash payment,” Attorney Mark Lesko for the Eastern District of New York said.

Officials say the officers face five counts of using interstate facilities to commit bribery and two counts of conspiracy to violate the Travel Act, which focuses on the use of communications and travel facilities to perform the unlawful activity.

Smith, 44, and Hassett, 36, recruited Busch, 34, to join the scam after Smith entered into retirement.

In private text messages, Smith allegedly used racist language and admitted to pulling his gun on Black people to intimidate them.

“Bro, I point my gun out the window now at [n-words] and watch their reaction and drive away. Hilarious,” Smith wrote, according to a government memo opposing bail for Smith.

“Smith’s unabashedly racist and hate-filled language in his communications included regular references to Black people as [n-words] and numerous references to the Ku Klux Klan, including one — just after retirement — in which he wrote, ‘Now the real [S]mith will shine. I even shaved my head. Klan,” the memo stated.

Smith was detained under police custody until his bail hearing last Friday.

Busch and Hassett were released on $200,000 bonds. They are both suspended without pay, according to NYPD Commissioner Dermot Shea, who said, “there is no tolerance for the alleged corruption.”

Atlanta Introduced The Black Music and Entertainment Walk of Fame