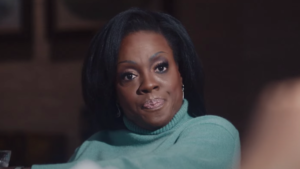 A trailer for Showtime’s star-studded The First Lady, depicting the life of previous presidential couples throughout American history, dropped yesterday.

The First Lady follows the lives of three iconic White House matriarchs behind closed doors, the personal and political struggles each one faced, and how they navigated their “controversial” contributions to the nation, Variety reported.

“In four years I don’t want to look back and think ‘What did I become living in that house?’” starts the two-minute trailer with Davis contemplating on Fagbenle’s lap.

The trailer depicts the first ladies as a force to be reckoned with, as Anderson’s Roosevelt reminds FDR: “You are the husband of a wife who has a mind and a life of her own,” while Pfeiffer’s Ford emphasizes to her husband, “I will be here for you, but I’m going to be myself.”

According to Showtime’s website, The First Lady seeks to recount modern U.S. history through the lens of these powerful women behind the scenes.

“Throughout our history, presidents’ spouses have wielded remarkable influence, not only on the nation’s leaders but on the country itself,” said Jana Winograde, president of entertainment at Showtime Networks Inc. in a press release. “

The series, Winograde added, ” its perfectly within the Showtime wheelhouse of drama and politics, revealing how much personal relationships impact both domestic and global events.”

“Playing the extraordinary @MichelleObama was no small task but an honor of a lifetime,” Davis posted on her Instagram, along with the trailer of the show.