JACKSONVILLE, Fla. — There certainly were a lot of things for NFL teams to love about Trevor Lawrence, but there’s one thing that arguably stands above the rest: The guy hardly ever loses.

Lawrence enters his first NFL preseason game on Saturday 86-4 as a starter — 52-2 at Cartersville (Georgia) High School and 34-2 at Clemson — and was perfect in the regular season (68-0). He lost four times in 22 playoff games, which means there’s a pretty short list of quarterbacks who have beaten him head-to-head.

Two are pretty easy to name: Joe Burrow, who led LSU to a 42-25 victory over Clemson in the national title game after the 2019 season and was the No. 1 pick in 2020 NFL draft, and Justin Fields, who led Ohio State to a 49-28 victory over the Tigers in a semifinal game this past season and was taken 11th in the most recent draft.

But the other two?

Not exactly household names, although one did go on to play college football. Chances are, unless you’re from the Atlanta suburbs of Buford and Roswell, you’ve probably never heard of either one, but Luke Humphrey and Jake Smith are the two high school quarterbacks who beat Lawrence.

Unlike Lawrence, Humphrey wasn’t a big-time recruit. He had to beat out a sophomore during camp to be the Buford Wolves’ starter, but he did have one thing in common with Lawrence in 2014: He also hadn’t lost a game.

Buford was 14-0 heading into the 2014 Class AAAA semifinal at Cartersville High School, and Humphrey had played well: He had thrown for 1,116 yards and 16 touchdowns with five interceptions. The week before, in a quarterfinal victory over Marist, Humphrey had thrown for a season-high 177 yards. Defense was Buford’s real strength, however. The Wolves posted seven shutouts and had given up more than 12 points in a game just twice.

For Humphrey and his teammates, the fact that Lawrence was a freshman and hadn’t seen a defense close to what he was going to see that night was the key. Although Lawrence had been pretty good and eventually would become the nation’s No. 1 recruit, he was a ninth-grader.

Buford believed they could take advantage of that — until the game started.

“Well, we show up, and the kid’s 6-foot-5 and can really sling it in warm-ups. That first drive he threw a couple passes incomplete, but they were on the money. He had some receivers drop some balls, and we were like, ‘All right, this kid’s the real deal, even though he is a true freshman.'”

Even so, Buford built a 14-3 third-quarter lead by pressuring Lawrence, forcing turnovers and playing ball control. It could have been an even bigger lead had the Wolves not made so many mistakes on offense — including a 57-yard touchdown pass by Humphrey to tight end Isaac Nauta (who played at Georgia and is on the Green Bay Packers’ training camp roster) that was wiped out by an illegal motion penalty.

“We did a play-action pass,” said Humphrey, who threw for 126 yards. “I was rolling out, I had a couple guys open, and actually Isaac Nauta had two people on his back, 40 yards down the field, and I threw one to him, and he made a play, scored the touchdown.”

More people play on ESPN than anywhere else. Join or create a league in the No. 1 Fantasy Football game! Sign up for free >>

Buford sealed the game late in the third quarter when safety Steven Reese intercepted Lawrence and returned the ball to the 3-yard line and running back Joshua Thomas scored his third 1-yard TD of the game three plays later to put the Wolves up 17 (they won 27-3).

It’s what Buford linebacker Konnor Houston did on that interception Humphrey remembers even more, though.

“Trevor Lawrence is about to make the tackle and Konnor Houston peeled back on him and had a pretty big hit on him,” Humphrey said. “He [Lawrence] actually jumped right up from that, and we’re like, ‘That kid is tough.’

“It would have probably been a penalty in today’s world.”

Even though Buford would go on to beat St. Pius X Catholic 55-10 to win the state title, Humphrey said the victory over Cartersville is the game he remembers the most from that season.

“Beating Cartersville in the final four with Trevor Lawrence at quarterback, that was probably the No. 1, the most difficult game to make sure we win this thing,” Humphrey said. “It was more of a big-time game than the championship game.”

What has Humphrey been up to since then?

Humphrey graduated the next spring and enrolled at the University of West Georgia. He eventually transferred to the University of North Georgia and now works in logistics. And yes, whenever he and his high school buddies get together, they do reminisce about that game.

“Cartersville probably gets brought up more than any other game, playing Trevor Lawrence,” Humphrey said. “Konnor Houston, he loves to kind of brag a little bit. Putting Trevor Lawrence on his back is kind of a memorable thing for him.

“It wasn’t a tackle he made or an interception, it was, ‘Oh, I hit Trevor Lawrence.'”

Humphrey, by the way, has closely followed Lawrence’s career since that night.

“It was really cool to beat someone of that caliber,” said Humphrey, who is a Georgia Bulldogs and Atlanta Falcons fan. “It was obviously a team effort. I pull for him now. I have the honor of saying I beat him head-to-head, but I’ve pulled for him ever since. Even after high school, he was at Cartersville and I was graduated, I wanted him to do well, wanted him to win. I’m not a Clemson fan. When he played, I pulled for Clemson. Now I’m not a Jacksonville fan, but I pull for Jacksonville.

“It’ll be something I look back on forever. And brag about probably a little bit to people.”

Smith has an even better story: He threw a game-winning touchdown pass with 12 seconds to play to beat Lawrence and Cartersville in a Class AAAA second-round playoff game in 2017.

Smith was a junior who had compiled some pretty solid stats for the Blessed Trinity Titans: 70% completion rate, 27 touchdowns and one interception, which, former Blessed Trinity coach Tim McFarlin said, came on a deflection.

Unlike Lawrence, who was the nation’s No. 1 recruit and was preparing to enroll at Clemson early the next January, Smith wasn’t a highly sought-after college recruit. Not as a quarterback, anyway. Some schools wanted him as a safety, but he eventually got an offer to play quarterback at Air Force, and he enrolled there in 2020. 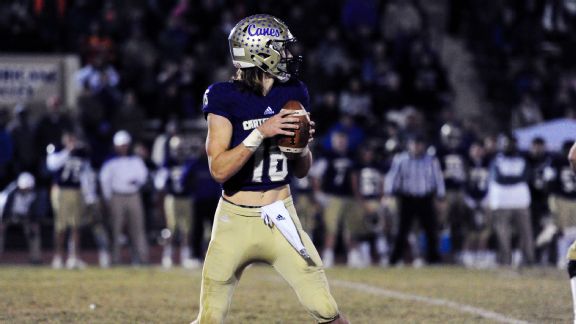 Smith, who declined an interview request through Air Force’s sports information department, started at both spots for Blessed Trinity and made an impact against Cartersville as a safety that night, too, including blowing up a wide receiver screen with a big hit.

“Jake came from the middle of the field, full tilt, and he got up under the screen and the [receiver] turned right into him,” McFarlin said. “And when Jake hit him, it was an explosion. Boy, that was a huge pickup for our sideline. I’m glad the kid wasn’t hurt, but it took him a little while to get up from that. Jake made several big plays like that.”

None bigger than the touchdown pass.

Lawrence had rallied Cartersville from a 14-3 deficit, and his Hurricanes led 17-14 with less than a minute to play. Smith had driven the Titans to the Cartersville 26-yard line with about 20 seconds remaining, and McFarlin decided to call up a shot at a touchdown on third down. If it didn’t work, he’d kick the field goal on fourth and take his chances in overtime.

But he really didn’t want to go to overtime in Cartersville. In a game they weren’t supposed to have a chance to win — they were, McFarlin said, 31-point underdogs.

The Titans had run the ball well all night and stayed in a run-heavy formation: two tight ends, two running backs and one receiver. Smith play-faked to running back Steele Chambers (now a running back and linebacker at Ohio State) while receiver Ryan Davis (a 5-10 junior who would go on to play at UAB) used a double move to get open.

Smith hit Davis in the back of the end zone to take the lead with 12 seconds to play.

“It was just one of those moments where we felt like we needed to take the shot in order to be able to get the win, and we were fortunate that we got behind him and scored the touchdown,” McFarlin said.

Blessed Trinity’s defense disrupted Lawrence all night, holding him to 142 yards and one touchdown passing. The 17 points were a season low — Cartersville had scored at least 35 points in its previous 11 games and surpassed 50 points seven times.

“As the game got tight, the longer the game went, I felt like the advantage kind of moved to our sideline,” McFarlin said. “They were not used to playing deep into the game. Most of their games were over by early-to-mid third quarter. They were averaging well over 40 points a game, and we had held them to one offensive touchdown.

“Late in the game I think the pressure of that showed up a little bit. They had a couple of drops. … It’s just one of those things where coaches say you play them 10 times [and you’d lose nine], and that was the one game [we won].”

Considering all the games and championships Lawrence has won in his career, it’s a little unfair to single out two losses and ask whether those games stick with him, but he was polite and agreed, and actually did remember some details and names.

And, yes, they do still sting.

“They always stick with you,” Lawrence said. “When you’re a competitor and a winner, that’s stuff you always remember. I mostly just think about we won two state championships and had a great four years, but I just think about what we could have done.

“First one was in the semifinals, could have had a chance to win there. But [Buford] was definitely a better team than us. But my senior year, knowing that we were the better team and just didn’t play well, that sucks. Like, my last year, it felt like we had the best team and didn’t end up finishing.

“You definitely remember them.”

Maybe now more people will remember Humphrey and Smith, too.