The late Muhammad Ali is largely considered by anyone with eyes to be the greatest boxer to ever live. Wheaties, currently celebrating 100 years in existence, has unveiled its limited-edition Century Box Series and the first cover athlete to be featured is none other than The Louisville Lip, The People’s Champion, The Greatest Of All Time, Muhammad Ali. 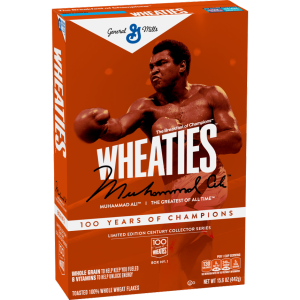 This past Tuesday (June 8), Wheaties unveiled the first of its Century Box Series with Ali on the cover, which features him in all his fighting glory. Ali’s signature is also present on the box, with wording suggesting that there will be more champions to get featured as Wheaties continues to celebrate its centennial.

Beginning in June, folks who want to snag a box of the Century Box Series for themselves can do so at their local grocery stores and other related retail locations. Further, for collectors, the Wheaties shop is open for business and there’s a special edition gold foil box for purchase along with other items. Wheaties has rolled out an exceptionally broad social media campaign where fans can learn more about the Century Box Series drops and collect them all.

Wheaties has always featured some of the best athletes and celebrity figures in the world, especially those who are champions for the voiceless, underserved, and misrepresented. This falls right in line with Wheaties believing that the world could use an infusion of more champs and they’ll need to fuel up with the healthy Breakfast of Champions.

And now, a word from the good folks at Wheaties, along with a little history lesson about the cereal:

100 years ago in Minneapolis, Minnesota, an accidental spill of bran gruel on a hot stove – which turned it into a crispy wheat flake – was the start of the creation of Wheaties.

100 years later, we’re celebrating the birth and cultural legacy of arguably the most-recognizable cereal box in the world.

Our celebration begins today, with the unveiling of the Century Collector Box series, starting with a collectible Wheaties box featuring humanitarian and boxing legend Muhammad Ali.

How dope is that?

As noted in the blog post, this is the third time Ali has been featured on the cover after showings in 1999 and in 2012. Sadly, the champ passed away in 2016 at the age of 74, but his legacy, impact, and his big spirit lives on by way of his family, friends, and the countless people he inspired worldwide not only through his pugilistic skills, but also his humanitarian efforts.

Learn more about the limited-edition Century Box Series here, and check out a video from Muhammad Ali’s daughter, Laila Ali, below. 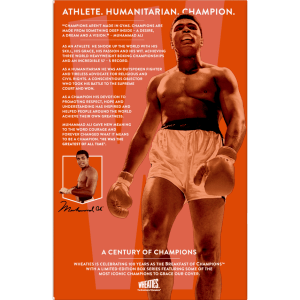