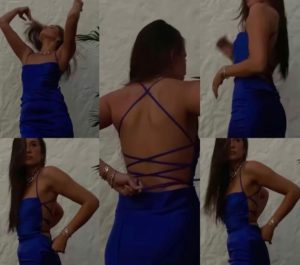 A Black fashion brand is claiming that Danielle Bernstein’s We Wore What jacked its original design for a dress.

Bernstein, who has been accused before by others of stealing designs from smaller fashion creatives, is accused of stealing from Ngoni Chikwenengere, owner of a Black-owned brand called We Are KIN.

Chikwenengere called Bernstein out on Sunday via Instagram, explaining how she sent the fellow designer and mega-influencer a We Are KIN’s Silk Strappy Maxi Dress in June 2020, which she says was ripped off by We Wore What in March 2021.

“I’m really sad to have to say this but I am the latest victim of WeWoreWhat and Danielle Bernstein’s crusade against small designers – I am heartbroken,” Chikwenengere said on IG. “As you may know, I run a sustainable, ethical, Black-owned brand We Are KIN with signature designs that are handmade to order.”

Bernstein is a 28-year-old New York Times‘ Best Seller with 2.6 million followers on IG who has generated more than $13 million in revenues at Macy’s in one year, Women’s Wear Daily reported.

“I don’t usually gift products but she has 2.5 million followers and I was flattered she would want to wear it and hoped I’d see some business off the back of it,” Chikwenengere wrote.

At the time, Chikwenengere had only about 18,000 followers on IG. When fashion watchdog Diet Prada entered the conversation with its 2.5 million followers, it amplified Chikwenengere’s frustration.

Is [Bernstein] is up to her old tricks again? This time, sustainable Black-owned brand [We Are KIN] says she’s fallen victim to Danielle Bernstein’s favored scheme,” Diet Prada stated on IG. “Now, Bernstein has posted a very similar dress as part of her [We Wore What] drop for April 8th.”

In August 2020, Bernstein was accused of stealing from a small Brooklyn-based lingerie store, Great Eros. Co-Christina Viviani told Page Six that Bernstein ripped off their signature tissue paper packaging for her peel and stick wallpaper product.

“I’m sick and tired of being accused of stealing designs or content that I ABSOLUTELY DID NOT. I am sick of screenshots of conversations without context or dates and part of something that looks similar, “ Bernstein said, according to Diet Prada. “These ridiculous claims for 15 minutes of fame are unfounded and unfair,” she continued.
⠀⠀⠀⠀⠀