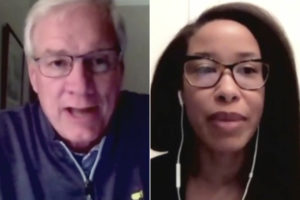 A white commission member in North Carolina has been ousted after he defiantly refused to reference a Black woman’s doctoral title.

Greensboro Zoning Commission member Tony Collins had his position revoked by the City Council this week after he had an intense exchange with Carrie Rosario, a doctor and associate professor at UNC-Greensboro, Charlotte Observer reports.

The incident occurred around the end of a four-hour Zoning Commission meeting where Rosario expressed concern about a development project that was taking place near her home. During their televised meeting, Collins was seen combating Rosario over her request to be referred to as “Dr. Rosario” and not the “Ms. Rosario” title he proceeded to call her.

But Rosario stood her ground on being referred to by her correct title. “It’s Dr. Rosario,” she said again. “I wouldn’t call you Tony, so please, sir, call me as I would like to be called.” However, Collins told the college professor that “It doesn’t really matter.”

A clip of the heated exchange was played during Tuesday’s City Council meeting where City Councilwoman Sharon Hightower said Collins was using his “white privilege” by being stubborn toward Rosario’s request.

“It was a very disrespectful exchange between an important commissioner and a public citizen,” Hightower said. “That should never happen.” She further called out how Collin’s behavior would not be tolerated. “As a Black female, I am not going to see another Black female treated in this manner,” she added.

Collins has reportedly reached out to Rosario since the meeting to apologize. But the Greensboro City Council members still came together to vote him out of the Zoning Commission.

Save On Stylish Sunglasses That Have Built-In Micro Speakers