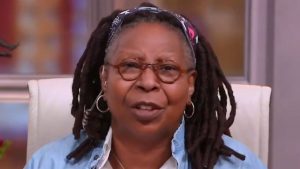 Whoopi Goldberg didn’t hold back while tackling the current debate around abortion rights amid a recent leak that revealed the Supreme Court’s draft ruling to overturn Roe v. Wade, the landmark 1973 decision that legalized abortion nationwide.

While speaking on The View on Tuesday, Goldberg, who has shared her experience of having an illegal abortion as a teenager, was incensed while discussing the women’s rights issue.

"If you don't have the wherewithal to understand that … then you're not looking out for me as a human being … and that is not okay." pic.twitter.com/u1DPPSp0Zm

“Women, when they decide something is not right for them, they’re going to take it into their own hands,” Goldberg continued.

“We got tired of tripping over [other] women in public bathrooms who were giving themselves abortions because there was nowhere safe, nowhere clean, nowhere to go.”

While directly addressing the Roe v. Wade decision, Goldberg explained why the law was passed and why it’s a “human issue,” not a religious one.

“It came about because people wanted people to have somewhere safe and somewhere clean,” she exclaimed.

“It has nothing to do about your religion. This is not a religious issue, this is a human issue.”

The EGOT recipient spoke passionately, describing why “getting an abortion is not easy.”

“It is a hard, awful decision that people make,” Goldberg said. “If you don’t have the wherewithal to understand that, to start the conversation with, ‘I know how hard this must be for you,’ if you’re starting it by telling me I’m going to burn in hell, then you’re not looking out for me as a human being, whether I subscribe to your religion or not, and that is not OK.”

Co-host Joy Behar shared her worry about what the draft ruling could mean for civil and gay rights.

“My worry is that this is just the beginning,” Behar said. “Next they’ll go after gay marriage and maybe … Brown v. Board of Education. They already eroded our voting rights a little bit. So I see fascism down the line here.”

The court’s holding on the Roe v. Wade draft ruling will not be final until it is published, Politico reports. The final ruling will likely come in the next two months.