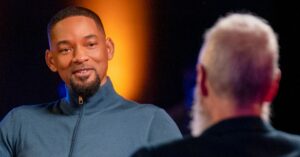 Will Smith sat down with Dave Letterman for his Netflix show My Next Guest Needs No Introduction.

During the in-depth discussion, Smith opened up about feeling like a “coward” during his childhood after watching his mother get physically abused by his father and not stepping in. The revealing interview, filmed prior to his infamous Oscars slap, sheds light on why Smith possibly reacted so violently to Chris Rock‘s joke on wife Jada Pinkett Smith’s baldness.

Smith was on the show to promote his 2021 memoir, Will, Deadline reported. The Academy Award-winning actor spoke candidly about the “pain” he endured during his childhood, his role in King Richard, and his thoughts on protecting his family.

At the start of the episode, the show made sure to note that “This episode was recorded prior to the 2022 Academy Awards ceremony.”

Smith explained his decision to take time off from acting to write his book.

“Life is so exciting to me right now because I can reach people differently than I’ve ever been able to reach people, largely because of my pain,” Smith said.

“I’m really ready to dive into my heart in a way that I think will be, hopefully, fulfilling for me and helpful for the human family.”

The Men In Black star touched on the intro to his memoir where he admits to having “always thought of myself as a coward” after he witnessed his father “beat up” his mother as a child and didn’t step in to defend her.

Smith’s way of coping with the “trauma” from the experience was to make people laugh and smile.

“When I showed up, I wanted people to feel good and be happy,” he explained. “Because I found that when my household was that way, I felt safe.”

Elsewhere during the interview, Smith shared his thoughts on protecting his family from the outside world.

“Protection and safety is an illusion. You have to learn to live with the reality that any moment, anything can be gone in one second,” he said.

Smith has accepted his Oscars ban and has remained in seclusion since the slap. Rock has continued doing standup and making small references to the attack. He has said he won’t talk about the incident until he gets “paid.”