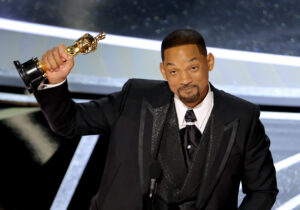 Academy Award-winner Will Smith will be one of the guests on the popular Netflix series, My Next Guest Needs No Introduction. The sit-down interview show has featured stars like Dave Chappelle, Kim Kardashian, and former President Barack Obama.

According to ComicBook.com, Smith’s episode was filmed before the now infamous Oscar slap, where he climbed on stage and struck Chris Rock after the comedian joked about Smith’s wife—Jada Pinkett Smith. The joke referenced her short haircut, which she maintains is due to alopecia.

According to the report, Smith is one of several luminary guests in the new season. Cardi B, Kevin Durant, and Ryan Reynolds are all set to sit down with Letterman. While Smith’s appearance was before the Oscars incident, the conversation should be an interesting glimpse into the star and his life.

Since the slap, several of Smith’s projects have been delayed or canceled. Bright 2—the sequel to the 2018 sci-fi thriller on Netflix has been canceled, although producers denied that it was related to the incident, as previously reported by Black Enterprise. Another project, Pole to Pole—has been delayed due to the slap. The National Geographic series is Smith’s third exploring the planet with the nature network.

Smith has not spoken out since the incident other than his initial apology. In a post on Instagram the afternoon following the 94th Academy Awards, Smith called his behavior “unacceptable and inexcusable.”

“Jokes at my expense are a part of the job, but a joke about Jada’s medical condition was too much for me to bear and I reacted emotionally,” he wrote. “I would like to publicly apologize to you, Chris. I was out of line and I was wrong. I am embarrassed and my actions were not indicative of the man I want to be. There is no place for violence in a world of love and kindness.”

Smith added in his post, “Violence in all forms is poisonous and destructive.”

He has been banned from all Motion Picture Academy events for 10 years.